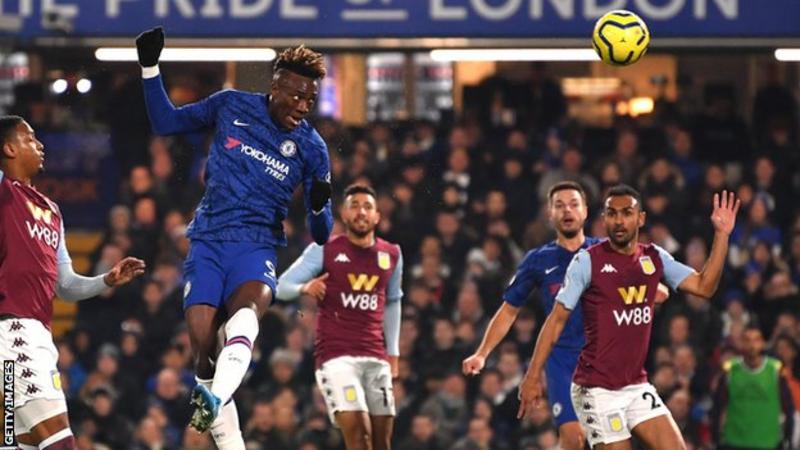 Tammy Abraham reinforced his importance to Chelsea by scoring the opener and setting up the second on his return from injury as the Blues returned to winning ways against Aston Villa.

Abraham missed the Blues’ home defeat by West Ham with a hip injury and put them ahead against Villa with a firm header from Reece James’ cross.

After Villa equalised against the run of play when Trezeguet bundled in, Chelsea regained the lead shortly after the restart when Abraham neatly chested Willian’s cross into the path of Mason Mount who thumped in a volley.

Chelsea, like they did in the first half before Trezeguet’s leveller, dominated possession and territory as they looked to increase their advantage.

Abraham twice came close to adding a third against the club he helped fire to promotion last season, while Willian – one of Chelsea’s other star performers – hit the post with an exquisite free-kick.

The Blues ended a run of back-to-back defeats with a victory which helps them consolidate fourth place, moving them six points clear of nearest rivals Wolves, while narrowing the gap on third-placed Manchester City to three points.

Villa, who have won just once on the road this season, remain in 15th place, a point above the relegation zone after Southampton’s win.

Following a tough week in which Premier League defeats by Manchester City and West Ham came either side of a Champions League draw at Valencia, Chelsea were looking to avoid three top-flight defeats in a row for the first time in four years.

They did that against a toothless Villa side, albeit with a tighter margin of victory than their performance deserved.

Mount’s stunning finish proved the difference but, with a refreshed Blues line-up featuring five changes from Saturday’s defeat having 25 attempts at goal, they should have been out of sight.

While England attacking midfielder Mount will take the plaudits for the winner, it was Abraham’s return from a hip injury which was the real catalyst for change.

The Blues had been wasteful against West Ham and Abraham provided a clinical edge after holding his line to head in from 12 yards.

It was a richly deserved lead for the home side with Villa rarely having ventured into the Chelsea box, but it was greeted with muted celebrations from the 22-year-old striker, who scored 25 league goals in 38 Championship matches for Villa in his season-long loan.

“I said the club will always be close to my heart, last season was a long, hard season so I pay all my respects to them,” he said afterwards.

Blues boss Frank Lampard said before the match that Abraham was still suffering some pain in his hip, yet worked tirelessly throughout in a physical battle against muscular Villa centre-backs Tyrone Mings and Ezri Konsa.

After showing exceptional awareness and composure to tee up Mount’s winner, he was unfortunate not to score another himself – clipping wide of the left-hand post and being hustled out of a close-range chance by Mings – before departing to a standing ovation with seven minutes left. 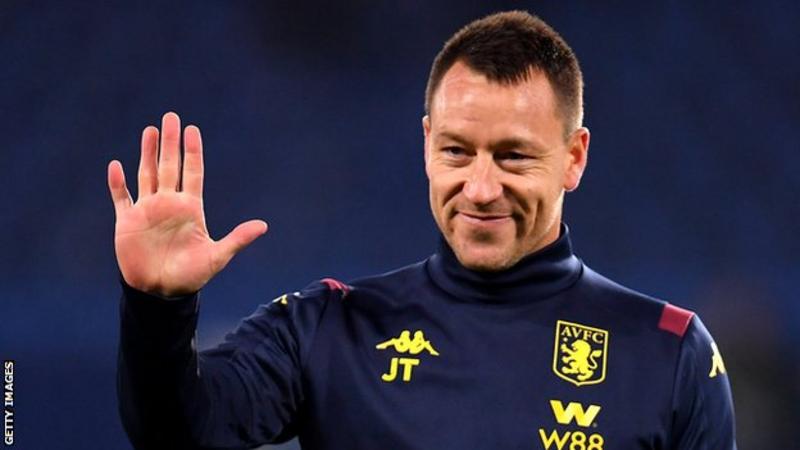 Villa have performed admirably against the Premier League’s leading lights since returning to the top flight, without earning the rewards their performances have merited.

Dean Smith’s side opened the scoring in four of their five matches against established top-six opponents this season, pushing Tottenham, Arsenal, Liverpool and Manchester United close, with only defending champions Manchester City beating them with relative comfort.

Although these displays provided plenty of encouragement, Villa earned a solitary point.

At Stamford Bridge, they again showed the basic prerequisites of hard work and organisation, but were unable to stretch Chelsea as their forays into the opposition half were limited.

A quick-thinking pass from skipper Jack Grealish, who Smith complained afterwards needs more protection from referees, was key in the attack which led to Villa’s equaliser, allowing Ahmed Elmohamady to cross to Trezeguet who bundled in at the second attempt.

Other than that, Villa rarely threatened as they managed just three shots on target in the whole match, although Chelsea keeper Kepa Arrizabalaga was required to deny Douglas Luiz what would have been an undeserved equaliser.

“We’re not far away, I don’t want to keep using the word ‘competitive’, we can be as good as these teams, we showed that in pockets,” Smith said.

“We need to be more consistent in what we do and braver on the ball.”

“I thought we were great. I’m pleased because that was us again, we had a blip against West Ham and today we were back.

“Our character at half-time was important and we carried off where we left off. The disappointment of the day is we didn’t score two or three.

“Villa are stubborn, have picked up results on the road and you can see why. They have good players and are well organised.”

“I thought it was a fair result, the better team won.

“We had pockets of play throughout the game but not enough relentless pressure. We didn’t start either half well and they put us under pressure. We gave the ball away too cheaply, but got back into the game and when we showed a bit of belief we showed we could give them problems.

“They had the initiative, we knew they would start well after losing a London derby on Saturday.

“You don’t get much from officials here and I wasn’t happy with their performance tonight. Jack Grealish must have been the most-fouled player on the pitch, there were five or six not given.”

Chelsea continue their dominance over Villa – the stats

Chelsea go back on the road with a trip to struggling Everton on Saturday (12:30 GMT), before Villa host Leicester City on Sunday (14:00).

Attempt blocked. Callum Hudson-Odoi (Chelsea) left footed shot from the right side of the box is blocked. Assisted by Mateo Kovacic.

Substitution, Chelsea. Jorginho replaces Willian because of an injury.

Mateo Kovacic (Chelsea) wins a free kick in the defensive half.

Attempt saved. Douglas Luiz (Aston Villa) header from the centre of the box is saved in the bottom left corner. Assisted by Ahmed El Mohamady with a cross.

Jack Grealish (Aston Villa) wins a free kick in the attacking half.

Mateo Kovacic (Chelsea) wins a free kick in the defensive half.

Ezri Konsa Ngoyo (Aston Villa) wins a free kick in the defensive half.

Attempt missed. Ahmed El Mohamady (Aston Villa) right footed shot from the centre of the box is just a bit too high. Assisted by Marvelous Nakamba with a headed pass following a corner.

Attempt blocked. Douglas Luiz (Aston Villa) header from the centre of the box is blocked. Assisted by John McGinn.

Attempt blocked. Jota (Aston Villa) left footed shot from the right side of the box is blocked. Assisted by John McGinn.

Mateo Kovacic (Chelsea) is shown the yellow card for a bad foul.

John McGinn (Aston Villa) wins a free kick in the defensive half.

Attempt saved. Tammy Abraham (Chelsea) right footed shot from outside the box is saved in the centre of the goal.

Attempt saved. Willian (Chelsea) right footed shot from outside the box is saved in the top right corner.

Tammy Abraham (Chelsea) wins a free kick in the attacking half.

Attempt saved. Christian Pulisic (Chelsea) right footed shot from the left side of the box is saved in the centre of the goal. Assisted by César Azpilicueta.

Attempt blocked. Mason Mount (Chelsea) right footed shot from the left side of the box is blocked. Assisted by César Azpilicueta.