Brad Fittler stalked the sideline at Cronulla on Sunday with a microphone in hand and praying the only certainty in the never ending uncertainty that is the NSW halves debate came off with a bruised body and bruised ego and nothing else.

News filtered through at about half-time of the Sharks’ backs-to-the-wall win over James Maloney’s Panthers that he would need a new No.7, Mitchell Pearce in the casualty ward for 16 weeks. It was no great surprise given the prognosis from the night before. 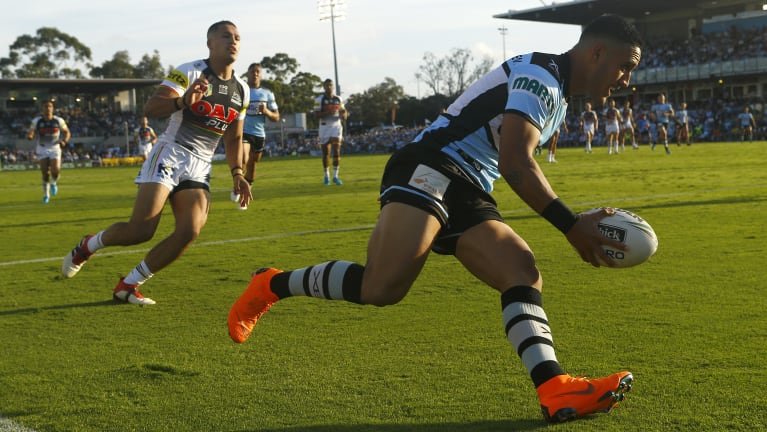 On a day when the Sharks sent Andrew Fifita into their post match press conference – who thought they would have seen that happen? – as their entire starting back row of Paul Gallen, Wade Graham and Luke Lewis started the day or finished it in the stands, Maloney had a clean bill of health.

It was the only good news for the Panthers, whose late rally was far too late in a wild 26-22 defeat to the Sharks.

The swap deal with Matt Moylan he has dominated so far through the first six rounds couldn’t be extended into a seventh week. Moylan shone brighter, Chad Townsend looked good too. But Fittler still has a NSW No.7 pencilled in – for now – and no further clarity on who will stand next to him.

Perhaps the story of the match was the man he long put the pen through. 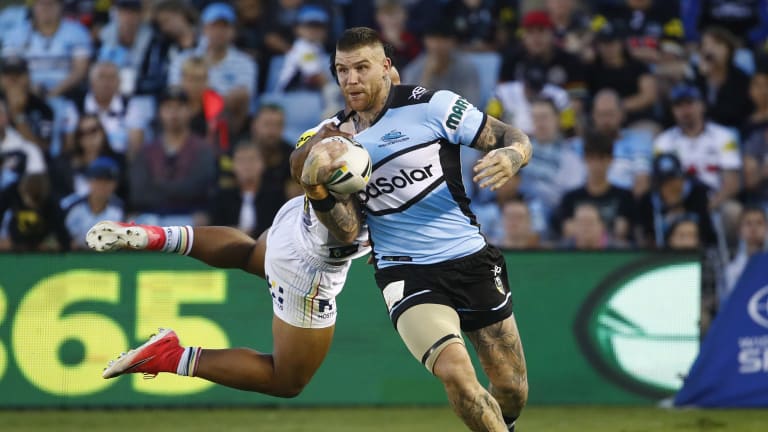 Fifita is playing for Tonga rather than NSW, was told his season could be over a week ago with a suspected ACL tear and then carried a big black brace over his knee and was in everything as stand-in skipper Lewis (calf) limped off inside the first 15 minutes.

He hailed his physio, his dad and a bit of old “Tongan treatment”.

“I was that scared to take the field today with my knee and a little help from my dad [helped] pushed me over the line on Tuesday night,” Fifita laughed. “Last week I was thinking my season was finished, but here we are.”

Asked about his dad’s remedy: “That old school Tongan treatment. It’s not the best of treatments and you feel like crying when he does it, [but] I’m just grateful I got to be on the field with the boys.”

Who is on the field for Flanagan next week is anyone’s guess. He might need a search party to find a fit back-rower as his side surrendered two tries in the last five minutes to send a shudder through more than 12,000 fans in the Shire. Yet they held on. 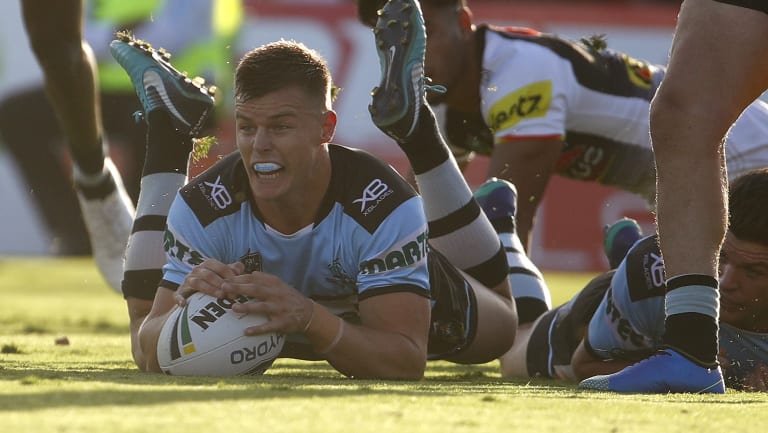 Shark alert: Jayden Brailey dives on a loose ball in his own in-goal.

“If it went a bit longer who knows, they might have come and got us,” Flanagan shrugged. “It was one of our bravest wins for a long time. They all made a huge contribution. We’re pretty battered at the moment with Wade and Gal out and Lewy hurting himself today.”

For all the talk about Maloney before, Moylan captured the imagination after. Finally free of the niggles which have plagued him through the first two months, he looked every bit the player the 2016 premiers thought they were getting when they sent Maloney west.

“You’ve got to remember Matty had two weeks out injured and probably played a little underdone,” Flanagan said. “He had a knee injury and hamstring injury. He’s over them now and I think you’ll see the best from him in weeks to come.

“I think everyone gets ready for a big game against their old club. You can’t wipe the smile off his face now.”

Newcastle-bound Jesse Ramien bagged a second-half double to lift gloomy moods around Cronulla, who watched six-game NRL toiler Scott Sorensen carry the famous surname with pride in a 40 metre burst for a first half try.

It gave the Sharks a lead they would never relinquish.