Home » Sport » WA derby history: our best on ground predictions as retrospective medals to be decided

WA derby history: our best on ground predictions as retrospective medals to be decided

The West Coast Eagles will have another significant western derby victory over Fremantle when retrospective best-afield awards are handed out in the wake of a farcical attempt to scrap the Ross Glendinning medal.

There was no top player officially declared after the first 12 derbies. 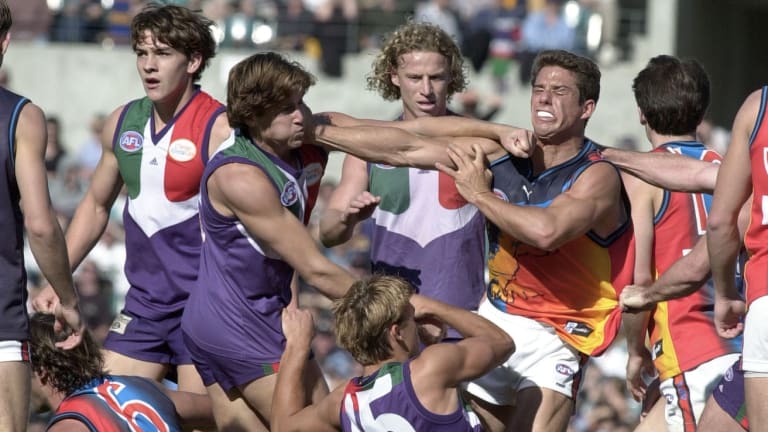 A retrospective count-back will settle any issue of just who was best on ground over the first six clashes.

West Coast won 10 of the first 12 bitter confrontations with their arch derby enemy from May in 1995 to July in 2000.

All victories, at an average winning margin of 46 points, will recognise that West Coast players were best afield.

Dynamic small forward goal-shark Brett Heady should win the first two medals with his five goals at each conflict.

Fremantle’s first-ever derby win in August 1999 will be recognised finally with an official best-on-ground accolade to prolific ball-winner Adrian Fletcher. 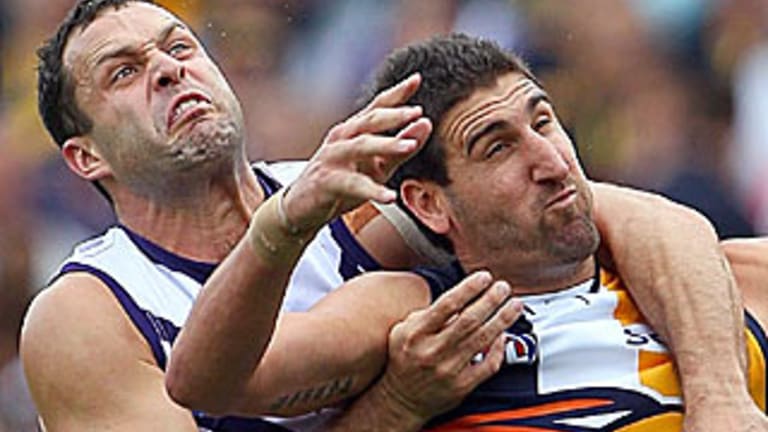 Zany forward Clive Waterhouse booted seven goals from 17 disposals and will be acknowledged as top player in the blood-soaked “Demolition Derby” in July of 2000 when Fremantle stormed back from five goals down into the third term to snatch victory by just one point.

A Carlton and United Breweries multi-million sponsorship for West Coast, Fremantle and WA football was introduced for 2001 and included a derby best player award named after Glendinning.

Gledndinning, the inaugural West Coast captain back in 1987, North Melbourne and East Perth great had spent two seasons as chairman of selectors at Fremantle.

Fremantle chief executive Steve Rosich rocked WA football circles on Monday, just six days ahead of a potentially emotion-charged first ever derby at Perth’s new stadium, that Dockers management did not want Glendinning associated with the traditional award at their home game. 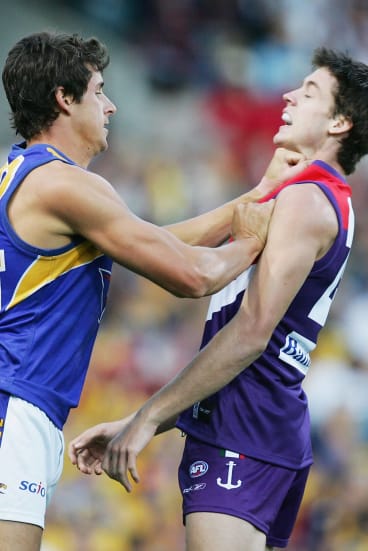 West Coast’s Michael Embley wrestles with Docker Steven Dodd during the round three Western Derby in 2005.

A common sense compromise has been reached with a Glendinning medal to be voted and awarded in Sunday’s historic derby and further negotiation to decide on a name for future West Coast and Dockers clashes.

There have been 34 Glendinning medals handed out to 21 winners.

Judd is the only derby star to collect a medal when his side lost, after Fremantle pulled off a remarkable victory by just five points in round six of 2006.

He was booed and jeered when attempting to make an acceptance speech.