Home » World News » Up to 2,000 indigenous protesters in grass skirts in Brasilia

Up to 2,000 indigenous protesters in grass skirts in Brasilia

Up to 2,000 indigenous protesters in grass skirts and headdresses march through the Brazilian capital accusing the government of stealing homeland

About 2,000 members of Brazil’s indigenous tribes, decked out in traditional feathers and body paint, marched Thursday on Congress to demand protection for ancestral lands from ever expanding farm businesses.

The activists were part of a week-long, annual indigenous protest camp that drew around 3,500 representatives from around 100 tribes, organisers said.

The marchers, some carrying bows and arrows, briefly blocked rush-hour traffic as they made their way to Brasilia’s legislature and justice ministry. 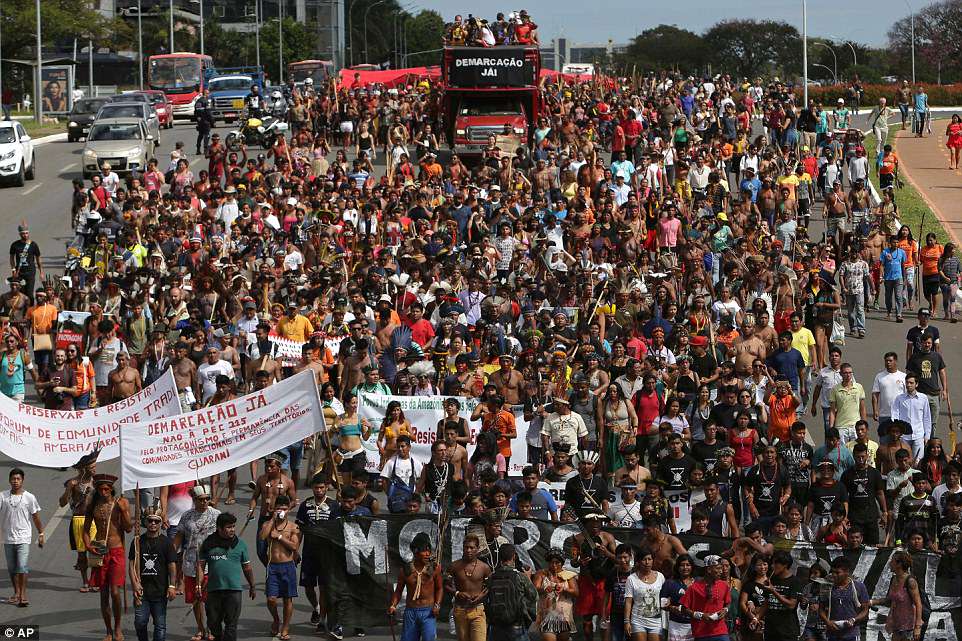 Around 2,000 Brazilian Indigenous people from various ethnic groups held a massive demonstration yesterday in Brasilia to protest against the policies of President Michel Temer’s government 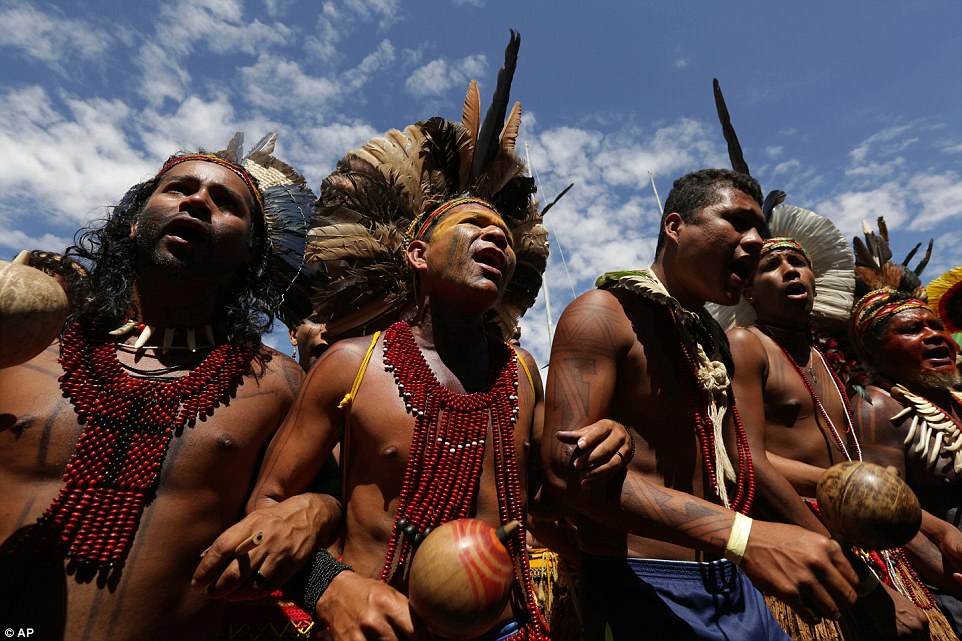 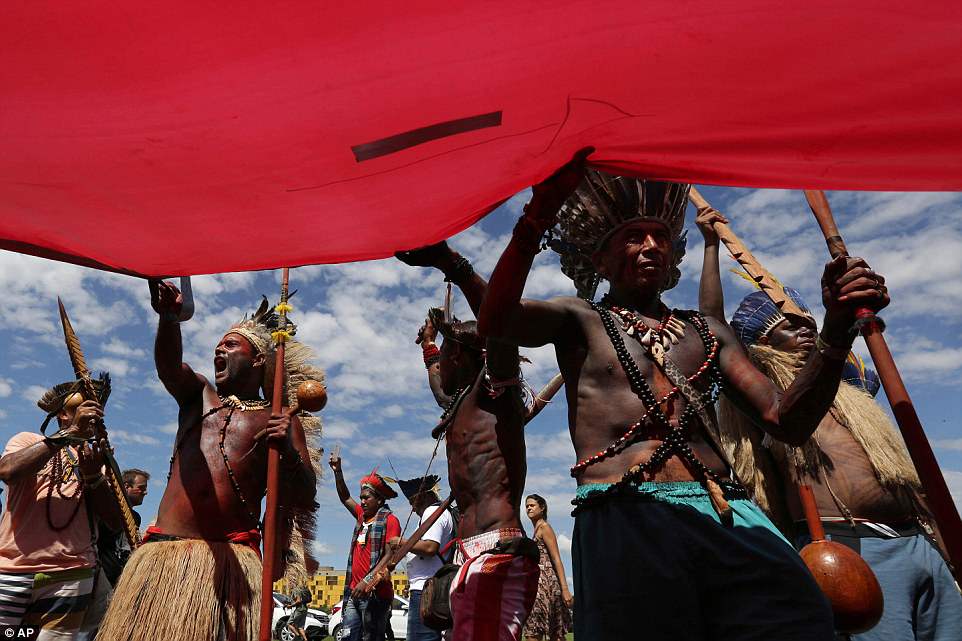 A long red banner was carried by demonstrators to symbolise a trail of blood due to conflicts with Brazil’s enormous ranching, soya and other food commodity industries.

‘Enough of indigenous genocide. Demarcate now!’ the banner said, referring to continuous delays in officially demarcating legally accepted tribal territories in order to give them extra protection from incursions.

Demonstrators made another ‘blood trail’ out of red paint that tribal chieftain Marcos Xukuru said ‘represents all the state violence against indigenous peoples in this country.’

Brazil’s indigenous peoples say deforestation and land grabs have increased under the conservative government of President Michel Temer, who is backed by agribusiness interests.

This year’s tribal camp, however, has been peaceful in contrast to violent clashes last year between protesters and riot police in front of government buildings. 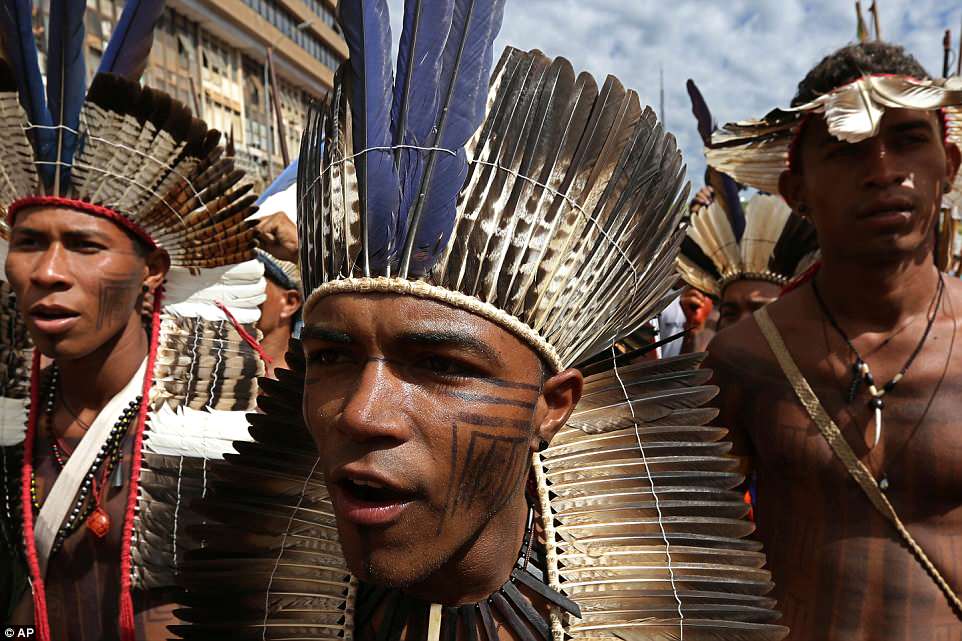 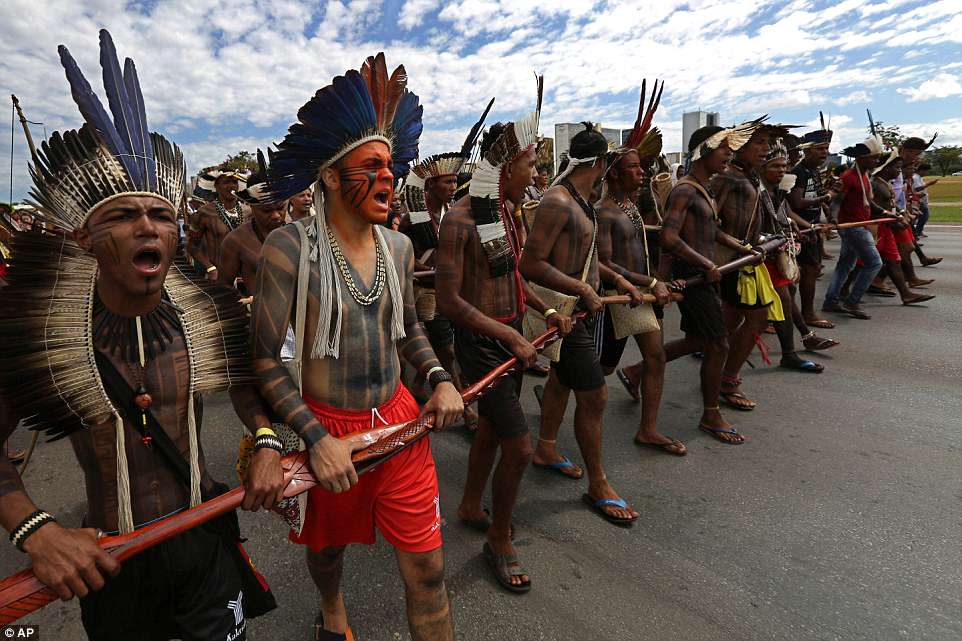 During this year’s weeklong ‘Free Land Encampment,’ indigenous groups have focused their ire on a rule adopted in July under which authorities can only designate lands as belonging to indigenous people if they were occupied in 1988, the year Brazil’s Constitution was adopted. Indigenous groups argue that the requirement ignores the history of dispossession in Brazil – which was especially brutal during the 1964-1985 dictatorship.

The rule will make the recognition of many pending indigenous land claims virtually impossible, activists say, and could even be used to claw back already designated land. That could open the lands up to logging, grazing and other business interests and could have serious implications for Brazil’s ability to protect its environment and stem deforestation.

‘There are lots of threats: orders, decrees, every type of document that they want to reduce our land, to not recognize our land,’ said Megaron Txucarramae, a member of the Kayapo tribe who marched Thursday. 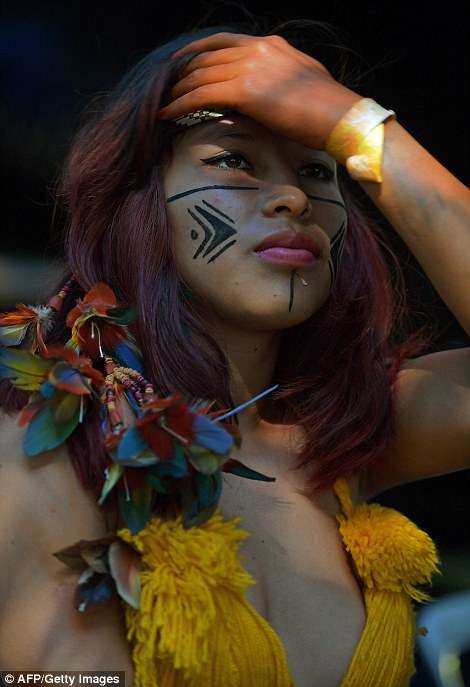 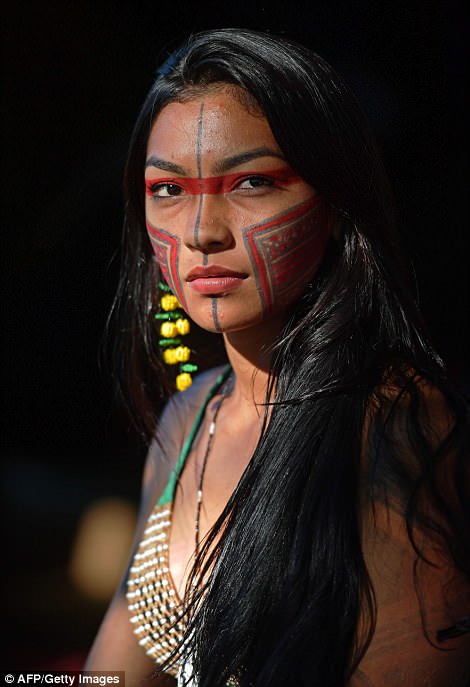 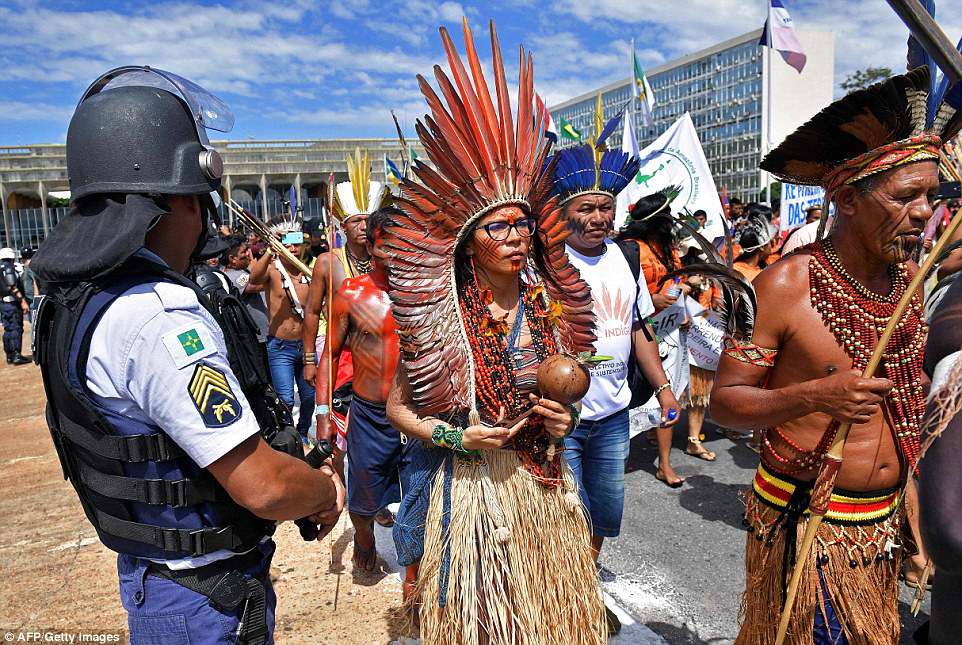 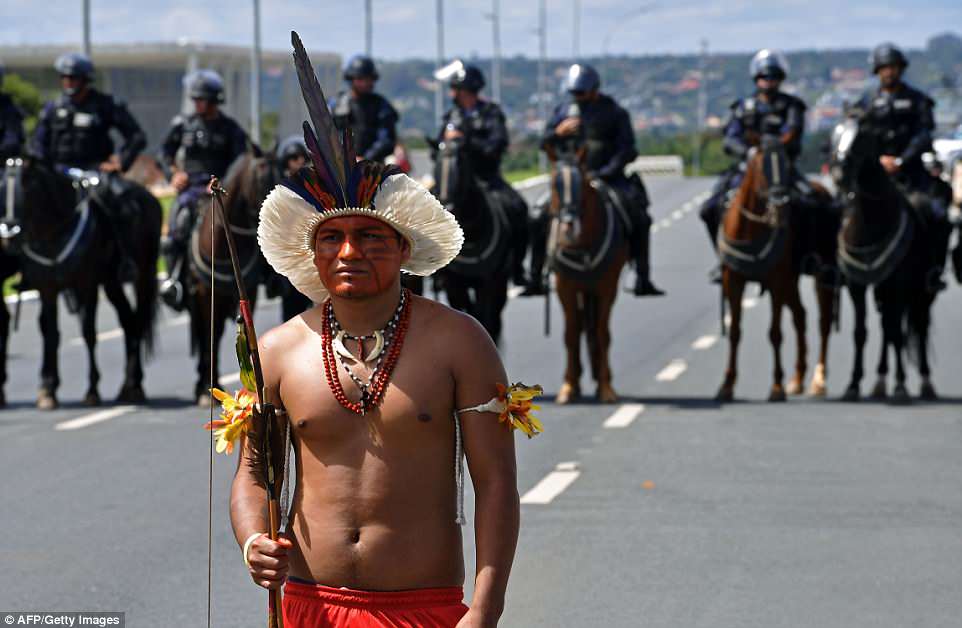 He was joined by between 1,500 and 2,000 other indigenous people – many wearing feathered headdresses, traditional grass skirts or face and body paint. Some groups danced through the streets, while singing, beating drums and shaking maracas. In front of the Justice Ministry, a handful of people lay down on a Brazilian flag and a sign that read, ‘End of the indigenous genocide.’ Others painted one lane of a central thoroughfare red, calling the mark a ‘trail of blood’ and saying it represented violence against indigenous people.

‘Never, in the past 30 years, has the Brazilian state opted for a relationship so completely adverse to the rights of indigenous people,’ the Coalition of Indigenous People of Brazil said in a statement earlier in the week.

The rule change was backed by Congress’ so-called ‘rural caucus’ – a group of lawmakers representing the interests of rural landowners who have been allies of Temer in Congress. The group typically argues for more land to be opened up to economic activity, saying that’s the only way to bring development and jobs to remote areas of Brazil.

Last month, the public prosecutor’s office requested that the rule be dropped, saying it violated rights guaranteed in the constitution. 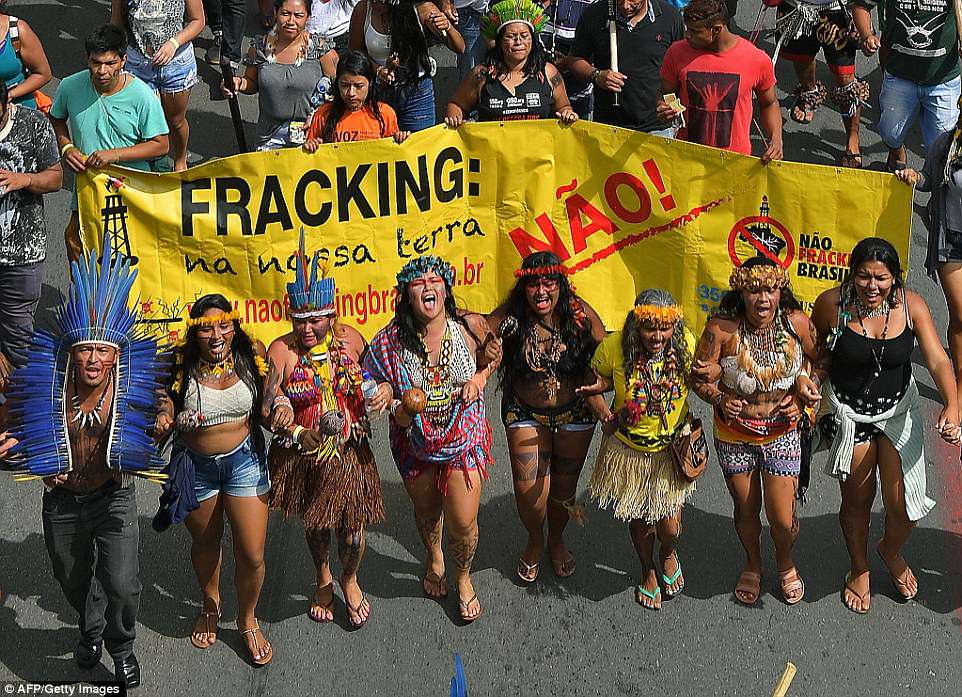 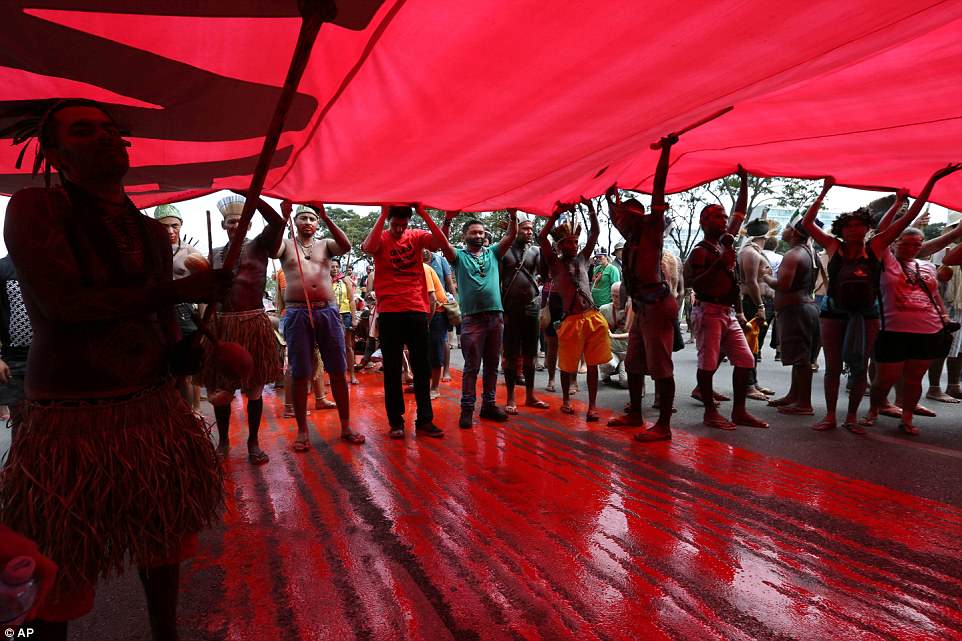 Last Thursday, the president’s office said he approved the designation of 50,000 acres in central western Brazil as belonging to the Guato people 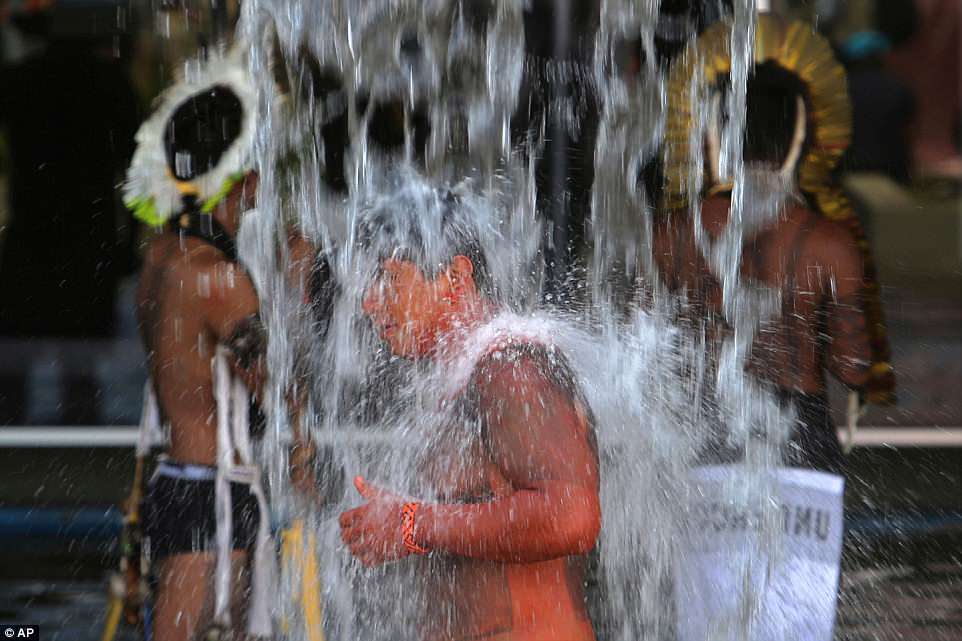 Temer’s office directed questions to the Justice Ministry, which handles land designations. The ministry did not respond to a request for comment.

Brazil’s 1988 Constitution called for the official demarcation of all lands belonging to indigenous people within five years, but that process continues to this day because of the complexity and political sensitivity of the issue.

Late Thursday, Temer’s office announced that he had approved the designation of a new parcel of land for the first time – recognizing nearly 20,000 hectares (nearly 50,000 acres) in central-western Brazil as belonging to the Guato people.

‘When society arrives, when economic actors arrive in our lands, it’s to exploit, it’s to take everything,’ said Valeria Paye, a coordinator for the coalition of indigenous groups. Indigenous people, meanwhile, ‘preserve them in a way that benefits not just indigenous people, this has a benefit for Brazilian society, for global society.’

The change comes as Brazil moves to slow deforestation in order to meet its obligations under the Paris climate accord and conflicts over land – often between indigenous people and businesses- are intensifying.

Last year, 70 people were killed in such conflicts, the most since 2003, according to the Pastoral Land Commission. Meanwhile, the rate of deforestation in the Amazon retreated last year after two years of increases.