Australia’s construction sector is bracing for a major slump over the next year as builders struggle with surging costs for raw materials, worker shortages, supply chain delays and looming interest rate hikes.

The chaos is also hitting consumers, who are facing long building delays and unexpected cost blowouts. 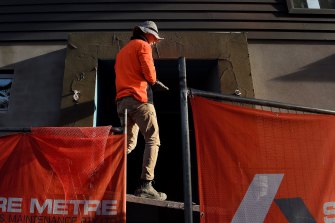 Westpac chief economist Bill Evans warned Australia would be building “a lot less” in a year. He said “a very major correction” was already underway, unwinding the huge demand surge linked to federal pandemic stimulus measures, such as the federal HomeBuilder scheme.

“If you want to think about the pressure that HomeBuilder has put on demand, Victoria has suffered more than any of the others,” Evans told a housing industry breakfast on Thursday. “And now, of course, we are seeing a very major correction.”

Australian Bureau of Statistics figures show nationally, dwelling approvals rose from 13,000 in June 2020 to a peak of almost 23,600 in March 2021, the second-last month of the HomeBuilder scheme. Approvals have since fallen, to about 15,000 in March this year.

Evans said building approvals will “come off a lot further when the rate hikes start to move”. But he said the softening wouldn’t necessarily be unwelcome, with builders already unable to cope with demand.

Acting chief executive of home building giant Metricon, Peter Langfelder, said on Thursday there was “no truth to the rumours” about the company’s financial ill health, with all of its contracts profitable.

“We’re completely up-to-date with all our trades, our suppliers, our employees, commissions,” Langfelder said. “We’re in a really strong viable position.”

His comments follow the sudden death earlier this week of Metricon founder and chief executive Mario Biasin, who had been facing mental health challenges, and speculation about serious cash flow issues for the building giant, which employs about 2500 people and has 4000 houses under construction.

Representatives of the company met with the Victorian government on Thursday to discuss what many in the industry see as a growing crisis precipitated by soaring prices for timber, steel, concrete, glass and other building materials, as well as severe shortages of skilled workers. Metricon has almost $200 million worth of contracts to build social and affordable housing.

One industry figure, who did not want comment publicly, described the situation facing the sector as “an absolute mess”, leaving “a lot of concerned people both on the consumer side and the industry side”.

In a statement provided The Age and The Sydney Morning Herald, Federal Housing Minister Michael Sukkar said the government acknowledged the pressure on the industry and the lengthy construction delays being faced by homebuyers.

“The COVID pandemic, continued global lockdowns and the conflict in Ukraine have created supply chain issues, with these global pressures impacting the construction industry in particular,” Sukkar said.

“We also know that these global supply chain issues are resulting in many homebuyers experiencing delays in the construction of their new homes. The government will work closely with the industry to help ensure that builders remain on sites, supplies are delivered, and houses continue to be built.”

“We’ve seen, over the course of the last few months, a stabilisation in material costs,” Clare told ABC radio. “But what’s getting worse, what’s really biting for companies like Metricon and others at the moment, is the area of skill shortages, whether it’s skilled workers on site or whether it’s labourers.”

Hermitage Homes and Kingsbridge Homes director John Goris, who oversees the construction of about 500 homes a year, said supply chain and labour shortages were adding months to the building process.

“From the receptionist all the way to the supervisor and even at my level, [there’s a large] amount of additional communications with clients and rescheduling with suppliers and trades,” Goris said.

“Because of delays you need to reschedule a job three or four times more than normal because every little cost centre and step along the way has been delayed.”

He said the main driver was people wanting to get into finished homes quicker.

Master Builders Association of Victoria chief Rebecca Casson reached out to those affected by Biasin’s death on Thursday morning, urging them to take care of their mental health. 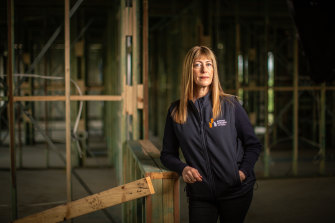 “Everyone in this room is under pressure. And it’s certainly taking a toll on lots of your mental health,” Casson said, noting that a suicide occurred every two days in the building and construction industry.

“It is more important now than ever that everyone sticks together and you all support each other.”

Master Builders has warned 98 per cent of its members have had their profits squeezed or are losing money, as the price of timber, steel, concrete and other construction materials soared, and deliveries are being delayed for up to six months. 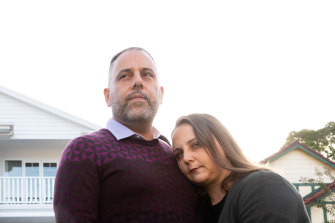 But the chaos facing the sector has to yet to trigger a large surge in the number of builders going broke, with 343 construction business insolvencies recorded in March this year, down from a peak of 546 two years earlier.

Metricon customer Salvatore Barbagallo, 42, has been in a protracted legal stand-off with the company, and remains unsure when, or if, his family will be able to move into his new home. Barbagallo said he was concerned about the company’s financial future.

“For us, it’s how do we get our keys and move in? How do we put this behind us and actually move on with our lives? What does that mean for their lifetime structural guarantees?” he said.

“What does it mean for the statutory warranties that are in place for six years because, whilst we’ve been aware of many defects, until you live in a place you don’t actually know what real problems are going to creep in,” the 42-year-old-father said.

He is among dozens of other homeowners who decided to build with Metricon and are fearful of losing their time and money, as their dream home hangs in the balance.

Victorian Treasurer Tim Pallas said Metricon had informed the government that all its trade creditors had been paid in full and on time and Metricon expects this to continue.

“Metricon also informed the Government that it is working constructively with its lender,” Pallas said.