Multiple gun shots can be heard in chilling audio that captures the death of of a young man who was murdered near a children’s playground after being mistaken for a robber.

Imani Allaway-Muir, 22, was shot dead after being hit by four of the 14 rounds fired at him in an Islington street on July 4, 2020.

Nathaniel Reece, 41, of Southgate Road, Islington — who fired the gun — pleaded guilty to murder on day two of an 11 week trial at the Old Bailey.

Demetrios Kyriacou, 35, of Liverpool Road, Islington, was also found guilty of murder during the trial. 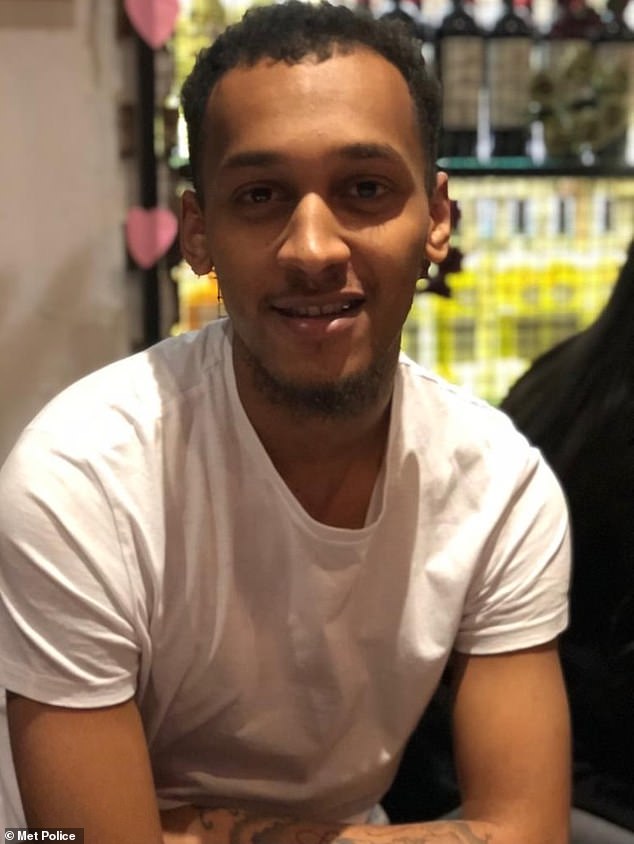 Imani Allaway-Muir, 22, was shot dead after being hit by four of the 14 rounds fired at him in an Islington street on July 4, 2020

Mr Allaway-Muir was in ‘the wrong place, at the wrong time’ said Detective Chief Inspector Neil John, from the Met’s Specialist Crime Command.

‘Imani was a young man who had his whole life ahead of him… he was tragically killed in a horrific act of violence that took place in broad daylight just metres away from a children’s playground and a football pitch which was full of children,’ he added.

Mr Allaway-Muir was fatally shot on Roman Way, N7, having been mistaken for one of the four men who robbed Kyriacou on Carville Street, N4, earlier that day.

Kyriacou had his Rolex watch, cash and iPhone stolen, and suffered head injuries from the robbery, as suspects drove off in a black BMW.

Police spoke to Kyriacou after the robbery, who was with his blue Range Rover.

He said he believed the suspects had a knife and he did not know them, but he did not wish to speak further about it.

Shortly after, the defendants met at Hardy’s home address on Six Acres Estate in Islington, where Kyriacou was living at the time.

At the flat, they located Kyriacou’s stolen property by using the ‘find my iPhone app.’

As they drove to Faraday Close, the defendants picked up a loaded gun and encircled the area on arrival.

Kyriacou and Reece were the last to arrive in the area shortly before 3.20pm. They got out of Kyriacou’s blue Range Rover on Faraday Close and went down an alleyway where a group of people, and the stolen property, were located.

Seconds later, Reece shot Mr Allaway-Muir four times on Roman Way, with the men running back to the Range Rover and the vehicles, and fled the area as quickly as possible.

Nicholson later collected the gun from Reece and disposed of it. It has not been recovered by the police.

Mr Allaway-Muir was found lying on the ground unconscious in a children’s playground about 20 metres from the scene by police officers, the London Ambulance Service and London’s Air Ambulance. 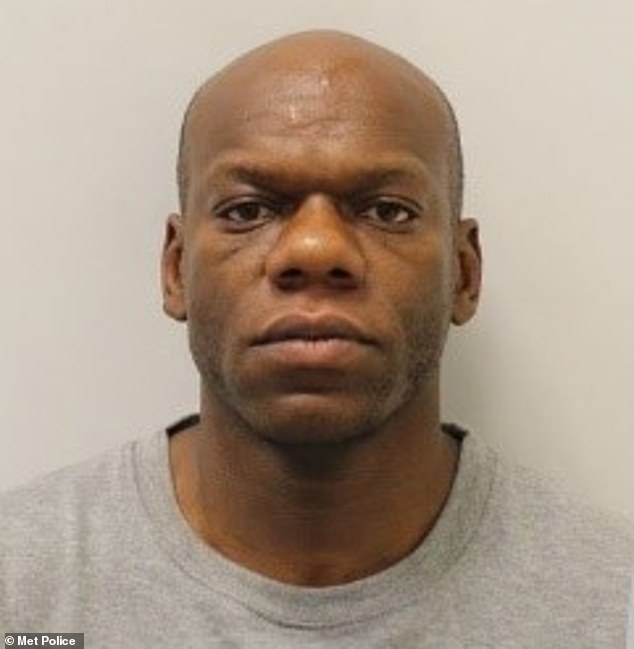 Nathaniel Reece, 41, of Southgate Road, Islington — who fired the gun — pleaded guilty to murder on day two of an 11 week trial at the Old Bailey 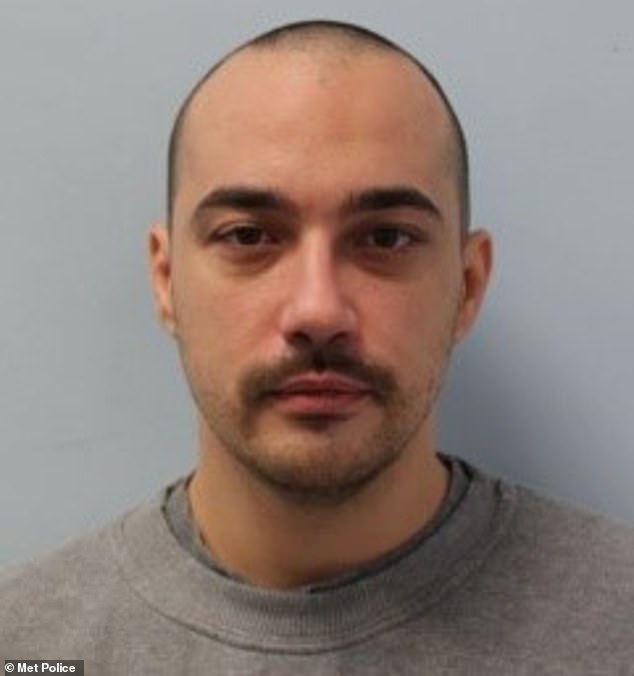 Demetrios Kyriacou, 35, of Liverpool Road, Islington, was found guilty of murder during the trial

Despite the efforts of the emergency services, he was pronounced dead at 3.49pm, around 30 minutes after he had been shot.

Officers searched the area of the shooting and found 14 bullet casings as well as an iPhone, two Nokia mobile phones and a snapped SIM card.

The phones and the SIM card belonged to Kyriacou and were part of the property stolen during the earlier robbery.

A black BMW was also recovered by police at the scene, which was the same one used by the suspects in the earlier robbery.

However, detectives established that Mr Allaway-Muir was not involved in the robbery of Kyriacou.

Tragically, he had arrived at the location where the stolen property was located moments before Kyriacou and Reece appeared. 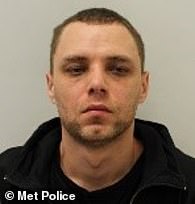 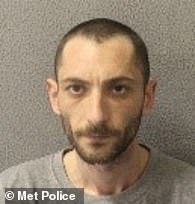 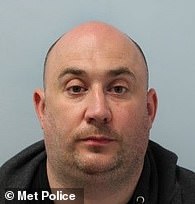 When Reece opened fire, Mr Allaway-Muir was simply in the wrong place at the wrong time.

The court heard that while it was Reece who discharged the firearm and took Mr Allaway-Muir’s life, the other defendants were all jointly responsible for this death, because in their different ways they knowingly assisted and encouraged the commission of the offence.

Detectives from the Met’s Specialist Crime Command launched a murder investigation, and were able to prove the defendants’ involvement by piecing together CCTV, mobile phone data and ANPR and speaking to a number of people who witnessed the attack.

Kyriacou, Reece, Hardy and Dredge were all arrested in July 2020 shortly after the murder, while Nicholson was arrested in February 2021.

They were all charged with murder, however Nicholson, Hardy, and Dredge were convicted of manslaughter.

They will be sentenced at the same court on a date yet to be set. 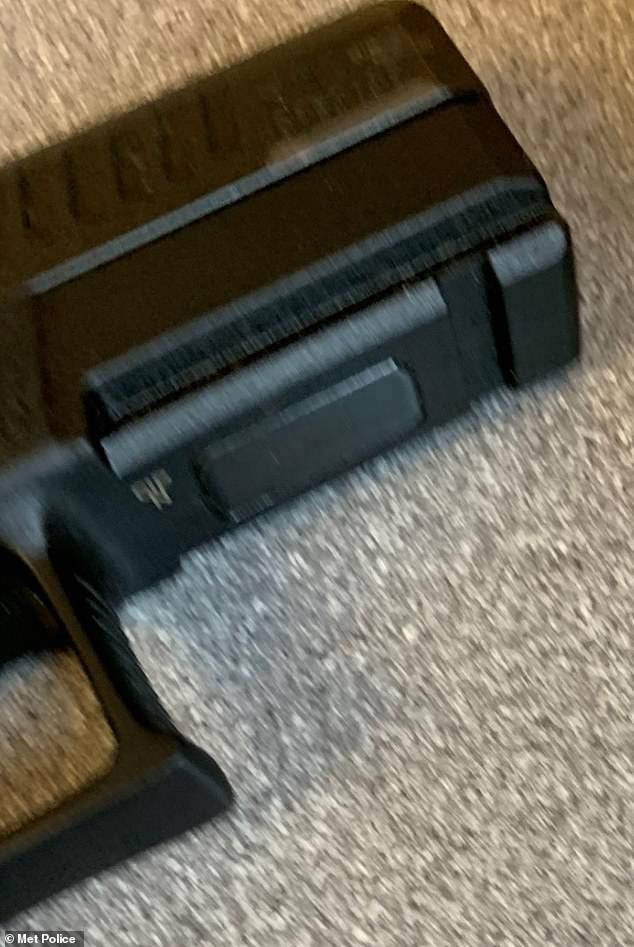 Image of a firearm that was found by officers on Kyriacou’s phone, after being recovered

DCI John added: ‘Kyriacou had refused the police’s help after the robbery and decided to take matters into his own hands, recruiting his friends to take part in his deadly revenge plan.

‘The joint actions of these men resulted in the execution of Imani, who paid with his life for a robbery he had no involvement in.

‘There is never an excuse for violence, especially violence using an illegal firearm, and everyone in the Met remains committed to tackling violence in all its forms and removing dangerous weapons, and those who carry them, from the streets of London.’

Three other men were found not guilty of all charges.