Beijing: Chinese President Xi Jinping has urged Chinese Communist Party members to remain loyal and continue to serve the people as he awarded a new medal of honour to 29 members as part of the ruling party’s 100th anniversary celebrations this week.

The medal award ceremony took place in Beijing’s Great Hall of the People with much fanfare and was broadcast live on national television, as the party prepares to mark its 100th birthday this Thursday. 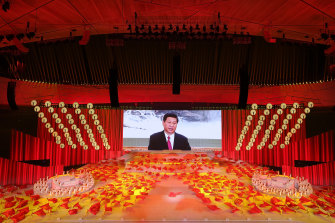 China’s President Xi Jinping appeared on a huge screen at the Gala. Credit:Getty

The “July 1 medal”, announced in 2017 and given out for the first time on Tuesday, is part of Xi’s efforts to shore up the image of one of the world’s most powerful political parties. 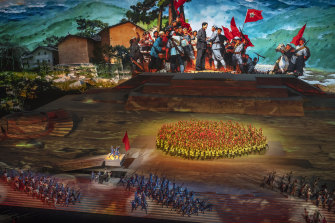 Performers take part in a historical routine in front of screen showing a painting of the late Chairman Mao Zedong. Credit:Getty Images

“All party comrades should take their faith in Marxism and the socialism with Chinese characteristics as their life’s purposes,” Xi said in his address to medal winners.

Over his nine years as party head, Xi has established himself as China’s most powerful ruler since Mao Zedong, who founded the People’s Republic in 1949 after defeating Chiang Kai-shek’s Nationalists amid civil war. 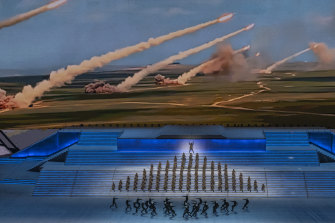 Performers dressed as the military perform in front of a screen depicting firing rockets. Credit:Getty

In his speech, Xi said party members should lead the drive for China’s “great rejuvenation,” a reference to his agenda for China to retake its centuries-old role as a regional and international power in culture, economics and military power.

“On the new march to a fully established modern socialist nation, keep moving toward the goals of the second century,” Xi said.

As part of the anniversary-week celebrations, the party also staged a gala performance on Monday night in the National Stadium, or “Bird’s Nest” as it is commonly called.

Party leaders and foreign diplomats watched the extravaganza of song, dance and theatre which credited the party with guiding China’s rise into a great power over the past century.

Darker parts in the party’s history, including a famine in the late 1950s, the Cultural Revolution in the 1960s and the 1989 Tiananmen Square crackdown, were omitted from the show. 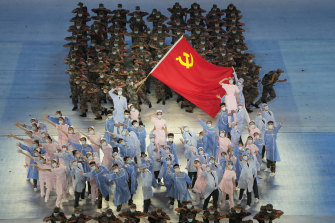 Performers dressed as first responders in the fight against the COVID-19 pandemic take part in a gala show ahead of the 100th anniversary.Credit:AP

The show culminated with the audience singing the song “Without the Communist Party, There Would Be No New China,” and five minutes of fireworks.

Many Chinese cheered the celebration by posting online well-wishes for the country and party on social media.

Some comments were less cheery.

“Only when housing price falls, can the people start to feel happiness,” read one comment, which received 39 “likes”.