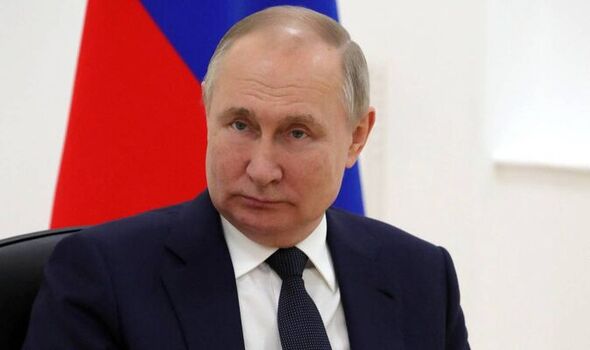 The dictator warned a “new wave of migration” is “inevitable” if international sanctions on Russia increase. He has already triggered the biggest humanitarian crisis since the Second World War by invading Ukraine.

Putin said Western sanctions would backfire and lead to higher food and fuel prices across Europe. The Russian leader also claimed he had “no choice” but to invade Ukraine and said the war had become “inevitable”.

Putin said: “On the one hand, we are helping and saving people, and on the other, we are simply taking measures to ensure the security of Russia itself.

“It’s clear that we didn’t have a choice. It was the right decision. The goals are perfectly clear, they are noble.

“Ukraine began to turn into an anti-Russian foothold.”

In an ominous sign for Western security, Putin also ordered military equipment to the Russian border with Finland.

Two coastal missile systems, which were seen driving past a sign to the Finnish capital Helsinki, are thought to be designed to take out surface ships up to and including aircraft carrier battle groups.

Finland is widely expected to apply to join Nato in the coming weeks.

Putin said “common sense should prevail” and that the West should “come back to reason and make well-balanced decisions without losing its face”.

He added that “they won’t be able to shut all the doors and windows”.

Putin also claimed peace talks had hit a dead end. More than 4.6 million Ukrainian refugees have fled their country since the invasion.

Defence chiefs yesterday warned “all options are on the table” if Putin has ordered chemical attacks in Ukraine.

The UK confirmed it is investigating reports Russia dropped a chemical bomb from a drone in the besieged city of Mariupol on Monday.

But defence minister James Heappey said Western allies may choose to take action on their own.

Mr Heappey warned any use of chemical weapons “will get a response”.

He added: “There are some things that are beyond the pale. President Putin should know that all possible options are on the table in terms of how the West might respond.”

The suspected chemical attack in Mariupol came hours after a pro-Russian separatist spokesman suggested it would need to use chemical weapons to “smoke the Ukrainian moles out of the underground”.

Ukrainian President Volodymyr Zelensky also warned Putin may be planning “a new stage of terror” if he was willing to drop chemical weapons.

No evidence has been provided to confirm the use of toxins.

The Ukrainian leader said: “Today, the occupiers issued a new statement, which testifies to their preparation for a new stage of terror against Ukraine and our defenders.

One of the mouthpieces of the occupiers stated that they could use chemical weapons against the defenders of Mariupol.

“We take this as seriously as possible.” Mr Zelensky also said war crimes investigators have received reports of “hundreds of cases of rape” in areas previously occupied by Russian troops, including sexual assaults of small children.

And the president published a photo of pro-Russia Ukrainian politician Viktor Medvedchuk in handcuffs after what he said was an operation by security forces.

Medvedchuk, the leader of Ukraine’s opposition Platform For Life party, had reportedly escaped from house arrest after treason charges.

The politician has claimed Putin is a godfather to his daughter and denies any wrongdoing.