WASHINGTON– As a fragile cease-fire holds between Israel and Hamas militants, diplomatic talks are underway to take account of the rubble left behind and how to pave a new path forward on peace talks.

But the 11-day Israel-Gaza conflict has tested the limits of Trump-era accords that had ushered in a geopolitical shift in the Middle East, promising the of peace.

Former President Donald Trump hailed his Abraham Accords, agreements that normalized relations between Israel and several Arab countries, as one of his greatest foreign policy achievements. But nine months later, a barrage of rocket attacks and airstrikes – the deadliest conflict since a 2014 war between Israel and Hamas – showed little has changed in the region.

More than 230 Palestinians and 12 Israelis were killed between May 10 and May 21, after Hamas launched rockets into Israeli territory following communal violence in Jerusalem. The attack prompted Israel to respond with an airstrike campaign that sent 58,000 Palestinians fleeing from their homes in Gaza, devastating infrastructure already crumbling from a 14-year blockade imposed by Israel and Egypt. Gaza is controlled by Hamas, which the U.S. and Israel consider a terrorist group.

Israel unleashed another wave of airstrikes across the Gaza Strip early Thursday as it pushed ahead despite U.S. calls to wind down the offensive against Gaza's militant Hamas rulers, who have fired thousands of rockets at Israel. (May 20)

The White House has defended what President Joe Biden described as “quiet and relentless diplomacy” to push for a cease-fire, while critics note the failure by the U.S. and international mediators to persuade both sides to end escalations early on. White House press secretary Jen Psaki said recently the Biden administration didn’t believe the Trump administration “did anything constructive to bring an end to the longstanding conflict in the Middle East.”

But analysts say the regional accords were never designed to resolve the Israeli-Palestinian conflict. (The countries behind the cease-fire are not party to the accords).

What are the Abraham Accords?

In one of his final foreign policy moves before he left office, Trump announced a series of agreements that established diplomatic and economic relations between Israel and four Arab countries – the United Arab Emirates, Bahrain, Morocco and Sudan.

“We’re here this afternoon to change the course of history,” Trump said during an elaborate White House ceremony in September. “After decades of division and conflict, we mark the dawn of a new Middle East.”

Though Trump and Israeli Prime Minister Benjamin Netanyahu billed the accords as peace agreements, the countries that signed on were never at war with Israel. The leaders of UAE and Bahrain, the first two countries to join, had been quietly building relations with the Jewish state for years. 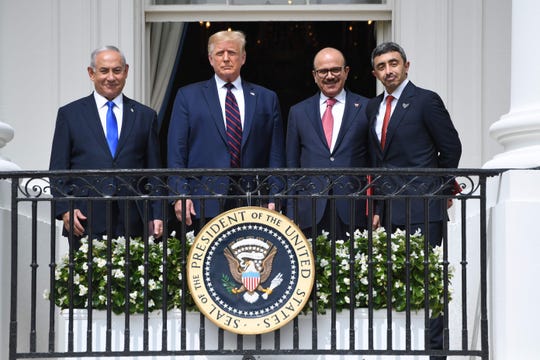 Vali Nasr, a professor at the Johns Hopkins School of Advanced International Studies, said while some of the signatory countries wanted a strategic partnership with Israel to counter Iran and Turkey, others saw the accords as a regional alignment as the U.S. looked to withdraw from the Middle East and refocus foreign policy efforts on combatting the rise of China.

Morocco’s deal included Trump’s recognition of its annexation of the Western Sahara, while Sudan, which once provided safe haven to Osama Bin Laden, was removed from the American State Sponsor of Terrorism list.

As part of a deal with the UAE – a key backer of the Palestinians – Israel agreed to temporarily halt its controversial plan to annex parts of the West Bank, land that Palestinians see as vital to their hopes of a future state.

“The reason it happened, the way it happened, at the time it happened was to prevent annexation,” Yousef Al Otaiba, UAE’s ambassador to the U.S., said during a Washington Institute for Near East Policy panel in February.

President Donald Trump said Thursday the United Arab Emirates and Israel have agreed to establish full diplomatic ties as part of a deal to halt the annexation of occupied land sought by the Palestinians for their future state. (Aug. 13)

Less than a year later, experts say the signatory nations find themselves in an uncomfortable position as the notion that the accords would give them leverage over Israel to aid in the Palestinian push for statehood ring hollow.

While UAE issued a statement condemning the threat of evictions of Palestinian families by Jewish settlers in East Jerusalem and a police raid on Jerusalem’s Al-Aqsa Mosque, the country was mostly muted as calls grew louder for Israel to end its airstrike campaign.

“It was not the flowering of peace in the Middle East as it was billed by the Trump administration,” Nasr said. “It was a group of countries opening up relations in ways that was beneficial to their individual, domestic and foreign policy interests and that truth has now been laid bare by what’s happened” in the region.

The agreements gave UAE and other Gulf states an opportunity to partner with Israel in the technology sector and to open up tourism.

Lucy Kurtzer-Ellenbogen, director of the Israeli-Palestinian Conflict Program at the United States Institute of Peace, said the accords represented “a turning point” for the signatories and other Arab states like Saudi Arabia, which has not formally normalized relations with Israel but is moving in that direction.

“They have decided they do not want their interests to be held hostage to a resolution of conflict and the fulfillment of Palestinian national aspirations,” she said.

Gerald Feierstein, senior vice president of the Middle East Institute and a 41-year veteran of the U.S. Foreign Service, said the accords deliberately marginalized Palestinians in favor of diplomatic and economic ties with Tel Aviv.

“The Abraham Accords were intended to demonstrate that the Palestinian issue no longer was significant for the Arab world,” Feierstein said. “These were bilateral agreements that were signed in these countries’ own national interests.”

Palestinian statehood was largely diminished by Trump’s pro-Israel policies and a focus on Iran over the last four years. But Israel’s airstrike campaign over Gaza sparked global protests in support of Palestinian civilians caught in the crossfire, and communal violence in Jerusalem raised alarm in the Arab world, leaving some wondering whether the new diplomatic dynamic could survive both public opinion and the smoldering ashes left behind by the latest war.

“It’s not a question of whether any of these states are going to renounce the agreements. They’ve decided these are in their national interest. The question is, what do you do with them?” Feierstein said. “It may be that these agreements stay in place but they become kind of empty.”

Any notion that the Palestinian Authority could look to the accords as a model of economic integration in peace talks forgets the fact that Palestine is not a state, unlike the UAE, Bahrain and other signatories.

“Palestinians are still under occupation, and therefore they do not yet feel there is a clear political horizon that this is where the Israelis or international community see this heading,” Kurtzer-Ellenbogen said.

‘Hamas was able to take advantage’

Jared Kushner, Trump’s son-in-law and the main architect of the accords, has argued the agreements “exposed the conflict as nothing more than a real-estate dispute between Israelis and Palestinians that need not hold up Israel’s relations with the broader Arab world.”

Trump and Netanyahu predicted more countries would join the accords, leaving Palestinians little choice but to negotiate a peace deal. But the latest violence has dimmed hopes of advancing peace talks.

Secretary of State Antony Blinken made his maiden trip to the Middle East on Monday, but State Department officials signaled the trip was more focused on ensuring the cease-fire “sticks” instead of any U.S. effort to revive a peace process.

Experts agree the Abraham Accords are a positive development in the region, but some say Trump’s full-throated support for Israel exacerbated the conflict.

Robert Satloff, executive director for the Washington Institute for Near East Policy, contends the Trump administration’s diplomacy on achieving peace talks “sucked all of the oxygen” out of the issue and contributed to Palestinians’ weakened standing.

He pointed to Trump’s own peace plan, which he unveiled last January with no Palestinian input. The proposal, which failed to gain any traction, endorsed a two-state solution pursued by previous U.S. presidents but was criticized as definitively pro-Israel.

President Trump unveiled details of his administration's prolonged plan for peace in the Middle East between Israelis and Palestinians.

“The punitive approach that the Trump administration took with the Palestinian Authority eroded the standing of [Palestinian President] Mahmoud Abbas and helped build the vacuum into which Hamas was able to take advantage,” Satloff said.

Abbas, 85, head of the Palestinian Authority, whose term was supposed to expire 12 years ago, canceled legislative elections before the fighting unfolded. His party had been trailing in the polls, and there was fear that Hamas would win.

Carrie Lynn-Keller, an American-Israeli based in Tel Aviv who served as a military liaison between Israeli Defense Forces and Egypt, said Hamas used the latest conflict to reassert itself on the world stage.

“The Palestinian Authority took away Hamas’ ability to have a democratic power grab, and now they’re going for a military power grab,” she said.

Biden has vowed to work with the Palestinian Authority, which controls the West Bank, but the State Department has conceded he will face significant hurdles in his promise to provide assistance to the Gaza recovery effort without any aid ending up in Hamas’ bank accounts.

Trump made a series of other moves that emboldened Netanyahu’s hardline agenda, according to Feierstein, including severing diplomatic channels with Palestinian officials, cutting off U.S. aid for Palestinian refugees (which Biden has since restored), recognizing Jerusalem as Israel’s capital and greenlighting Jewish settlement expansion.

Those moves “opened the door” to decisions such as proposed evictions in the Sheikh Jarrah neighborhood, the raid on the Al-Aqsa Mosque and to ensuring a “strong Jewish core in East Jerusalem,” Feierstein said.

“The Trump administration certainly didn’t start these activities, but they supported them through their policy decisions and strengthened those forces that created a far more fragile environment inside of Jerusalem as well as the West Bank and Gaza that exploded,” he said.

Israeli-Palestinian peace talks: Will the Abraham Accords play a role?

While the agreements have some potential to foster progress toward Israeli-Palestinian conflict resolution, it would require political will of Israeli and respective Arab leaders to move in that direction, according to Kurtzer-Ellenbogen of the U.S. Institute of Peace.

To date, that will is not apparent.

In fact, despite the advent of the accords, the posture and positions of the participating Arab states have seemingly not moved at all.

“Were one to have slept through the last nine months and missed that news story [about the accords], the breakthrough agreements would not be apparent in the context of dynamics around the current crisis,” she said.