When Prime Minister Scott Morrison announced on the eve of 2021 that the words of our national anthem would change to “one and free”, it seemed that a fait accompli was being declared without any of the necessary groundwork towards concrete reconciliation between the Commonwealth of Australia and the Indigenous peoples of this land.

When Indigenous leaders met to issue the Uluru Statement from the Heart in 2017, the word they used to encapsulate such a process of reconciliation came from the Yolngu language of north-eastern Arnhem Land: Makarrata. It was a word that a parliamentary select committee set up to respond to the Uluru Statement summarised as “settling our differences and moving forward together as one”. The sequence of those two elements is crucial. As former Indigenous Collingwood football star Leon Davis told this masthead: “Before we can move forward you have to deal with what has happened in the past. The foundation is not there yet to move forward from my point of view.” 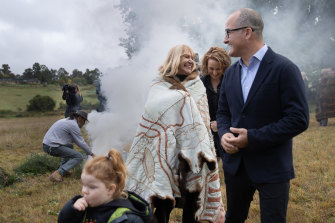 Indeed, only once the autonomy of Indigenous points of view and separate Indigenous agency has been recognised can such a process address the needs of all participants and create a new relationship. The unique experience of our Indigenous population demands a move beyond the prism of minority rights within a larger polity.

Tuesday’s launch of the Yoo-rrook Justice Commission by the Victorian government to guide the journey towards a treaty marks the first step on a path that will matter only if it can surpass symbolic gestures to redress the injustices of the past, make Aboriginal experience central to our understanding of this country’s present and give First Peoples a controlling stake in their futures.

That most of the commissioners will be Indigenous is itself welcome, although this puts an extra onus on Victoria’s government and state and national media to ensure that the commissioners’ work is not pigeon-holed as “Indigenous affairs” but is kept front and centre in our collective consciousness and conscience.

Among the models cited for the commission’s work are similar exercises in historical truth-telling carried out in post-apartheid South Africa and more recently with respect to the indigenous peoples of Canada. The latter’s Truth and Reconciliation Commission was part of a wider agreement that awarded billions of dollars in compensation to those put through the country’s residential schools system. If the Yoo-rrook commission is to seriously discuss a model for payment of reparations to Indigenous people, then it is vital that the government stays the course when talk turns to what may well be considerable sums of money.

The Andrews government also needs to pay attention to positive and negative aspects of such earlier efforts. To many black South Africans, the amnesties granted after damning testimonies of abuse seemed a mockery of their ongoing pain and powerlessness.

In Canada, progress on implementing the 2015 recommendations of their commission (which ran for seven years before that) as well as those of a separate inquiry into Missing and Murdered Indigenous Women and Girls has been criticised as piecemeal and too slow to benefit the communities they are meant to serve.

The course that the Andrews government has set out stretches years into our future – the hearings of the Yoo-rrook commission are scheduled to end in 2024, to be followed by a governmental response, political decisions and legislation. So it is also vital that attempts are made to transcend partisan politics in setting out objectives and what we are willing to do to achieve them. If we are to be “one and free”, that work will need to run in parallel to the commission’s.

It is crucial that this state’s Indigenous peoples are listened to and foregrounded, but it is even more important that that process and any treaty that flows from it gives them a permanent place in the rooms where decisions about their lives are made, and that its recommendations are implemented in a timely manner.

Only then can Indigenous disadvantage be ended. As ANTaR Victoria puts it: “A Makarrata … is not only an agreement, but shows ongoing respect.”

Note from the Editor

The Age’s editor, Gay Alcorn, writes an exclusive newsletter for subscribers on the week’s most important stories and issues. Sign up here to receive it every Friday.