‘We got older but we’re still the same’: World War Two veteran, 99, is reunited with a French woman, 92, who he had carried a photograph of in his wallet for 78 years after giving her bread and jam in Normandy in June 1944

A World War Two veteran has been reunited with a girl he gave a jam sandwich to in Normandy in 1944 – after he carried a photograph of her around in his wallet for 78 years.

Reg Pye, from Burry Port, south Wales, served with the 224 Field Company in the Royal Engineers as a driver carrying sappers, mines and ammunitions during the Battle of Normandy.

Whilst moving through Normandy in June 1944, 14 days after D-Day, Mr Pye spotted a 14-year-old girl staring at him as he ate his evening meal – a slice of bread with jam and a tin of pilchards.

The then 21-year-old immediately gave the girl his bread with jam and she ran away to eat it. 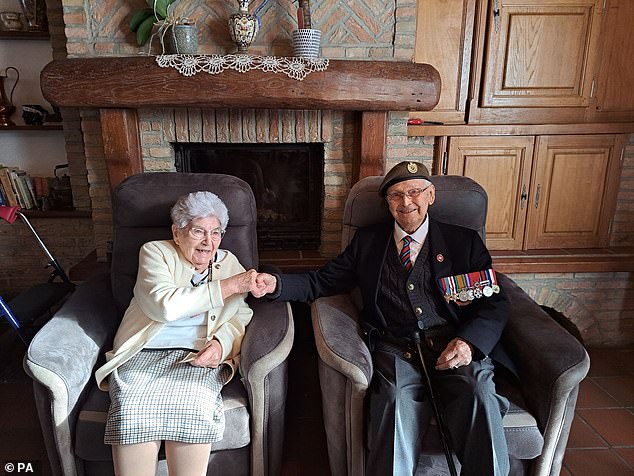 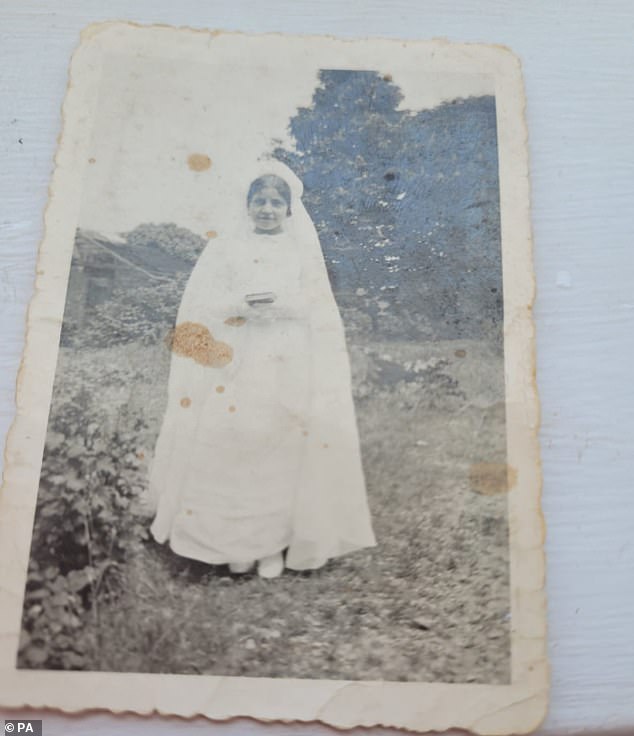 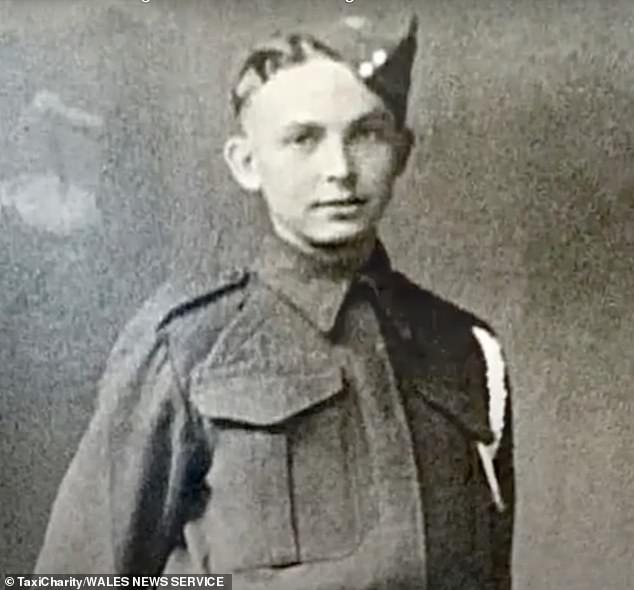 Reg Pye, from Burry Port, south Wales, served with the 224 Field Company in the Royal Engineers as a driver carrying sappers, mines and ammunitions during the Battle of Normandy (pictured here during the war)

When he woke the next morning, he found that she had half-filled his mess tin with milk and left a picture of herself with a written message on the back, which he kept in his wallet.

In November this year, the girl was identified as Huguette, now 92, and was reunited with Mr Pye in France where he showed her the picture he had held for 78 years, and gave her another jam sandwich.

Huguette joked that the incredible reunion meant they should get married and that she would leave her current boyfriend in the care home.

Huguette replied: ‘Merci! Nice to see you again after such a long time.

‘We got older but we’re still the same.’

Reg asked if she still remembered him from almost 80 years ago. She responded: ‘Yes, a little bit!’ 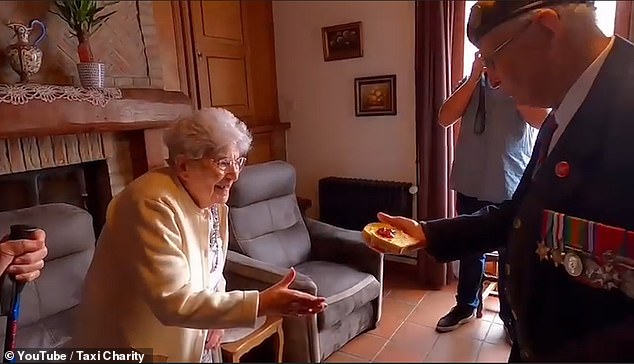 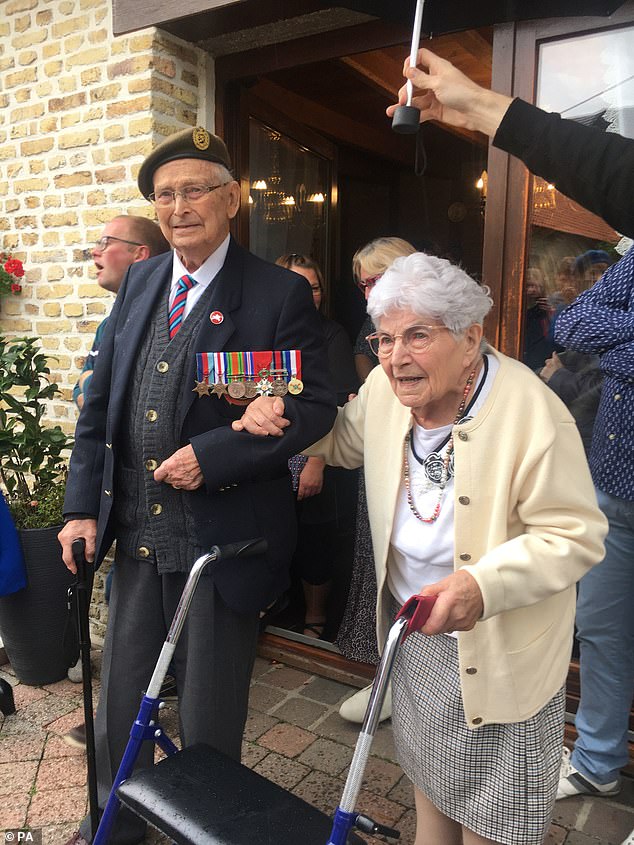 She added she was ‘extremely touched’ Reg had tried to find her.

They drank champagne with their extended families and a translator.

Mr Pye said: ‘The memory of my very brief encounter with this young girl will stay with me forever.

‘In the bleakest of times this bit of human interaction made a huge mark on my life, I have carried her picture in my wallet for 78 years always hoping we might meet again.’

Mr Pye went back to Normandy 20 years ago to try to find Huguette but was unsuccessful. 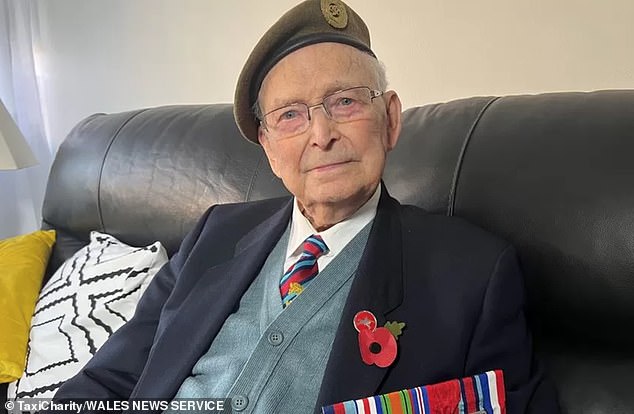 Reg, who celebrated his 99th birthday on Remembrance Sunday, was 21 when he and Huguette first met 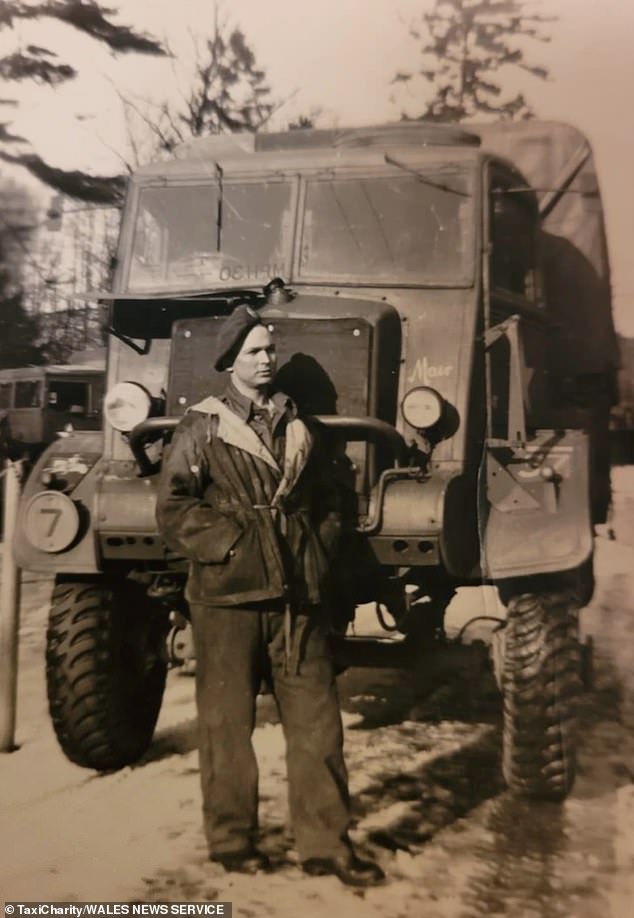 He celebrated his 99th birthday on Remembrance Sunday.

This time he offered Huguette a can of pilchards – and she rejected them with a smile – just like in 1944.

After hearing the story, volunteer Paul Cook, from the Taxi Charity for Military Veterans, an organisation run by London black taxi drivers which arranges free trips for veterans to the Netherlands, Belgium and France, started a social media campaign which eventually reunited the pair.

Mr Pye added: ‘I cannot believe that she has finally been found and I wish to thank everyone, including our friend Emma, our cab driver Paul and the Taxi Charity’s French adviser Nathalie Varniere, who have helped to make my dream come true.’

Mr Cook said: ‘There are no words to describe how elated I am that Reg has found Huguette, this is like a Hollywood blockbuster and I wouldn’t be surprised if this beautiful story was made into a film.’