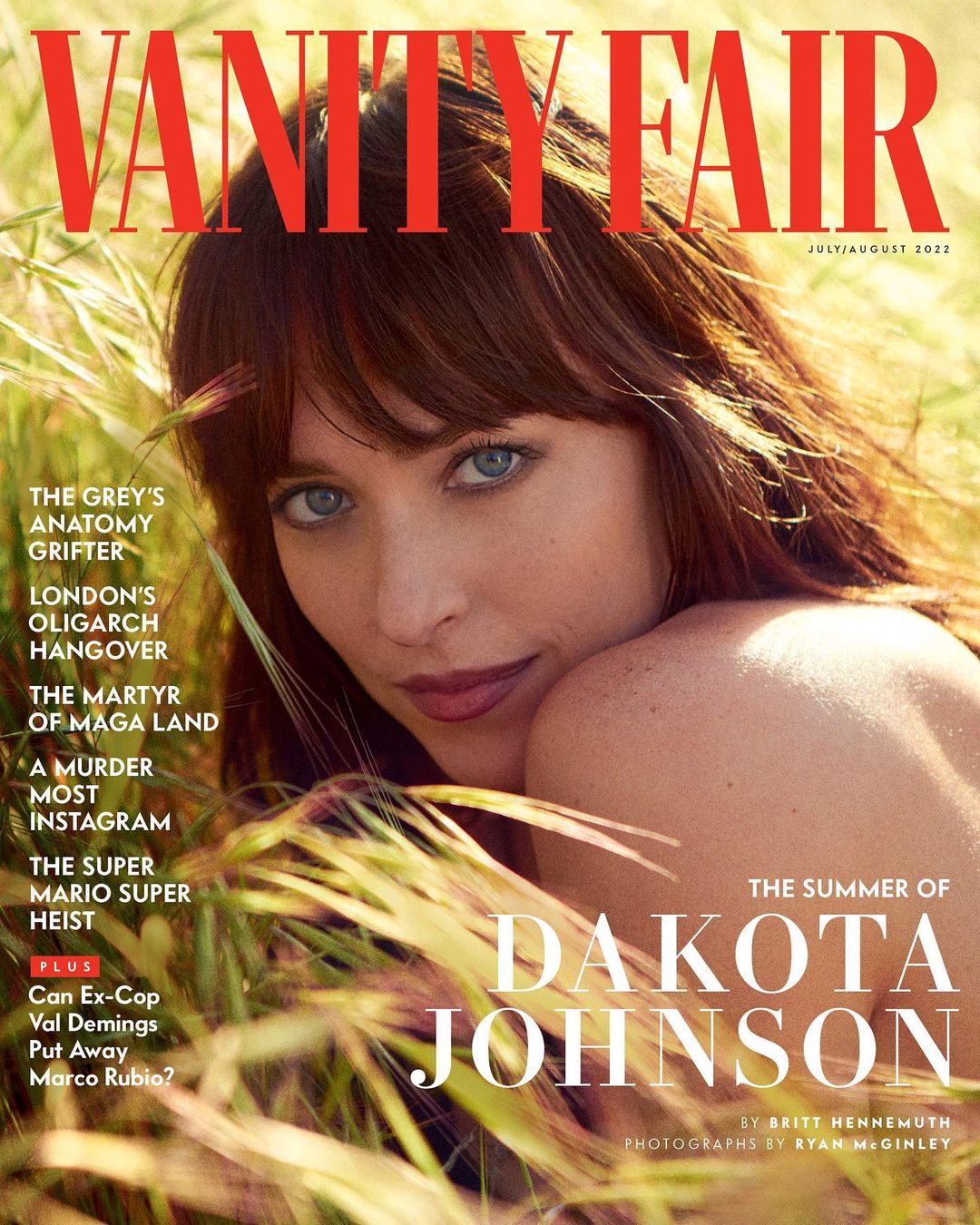 Dakota Johnson covers the latest issue of Vanity Fair. She’s promoting the new adaptation of Persuasion, which does not appear to have much resemblance to Jane Austen’s novel. Dakota plays Anne Elliot-as-Fleabag. Sigh. Anyway, I enjoyed this Vanity Fair cover story. Dakota comes across as very cool, wry and interesting. She’s got her own production company – which made and sold Cha Cha Real Smooth – and she’s the co-creative director for Maude, a vibrator company. She’s also been with Chris Martin for five years, which is bonkers. She touches on all of those subjects and more in this VF piece. Some highlights:

Her blended family with Chris Martin: “Maybe I think about relationships like that differently because I grew up in my family. We were all cool.” With each other, she means. “Obviously, there were times where it was not cool, but I experienced that, so I don’t want that in my life. I don’t want any kids to experience anything like that. It’s better to be kind, and it’s also really nice that everybody actually really loves each other and has each other’s backs.”

Her mother calls Dakota’s upbringing that of a “privileged gypsy.” Johnson wrestles with that term. “I think that glamorizes it a little bit or makes it seem like everything was totally amazing all the time. My life is incredibly lucky and privileged, and the life I led growing up was remarkable—the places I went and how we lived and what we were able to experience. But we also struggled with internal family dynamics and situations and events that are so traumatic.”

She loves seal-watching in Malibu: “Chris and I came down here the other day, and I was without my glasses. We were watching ‘seals’ for 10, 15 minutes—and it was seaweed. He just let me think that they were seals the whole time.” She imitates Martin, sounding sweet, patient, and slightly concerned. “Yeah, there they are: seals.”

On Persuasion: “I really felt like Anne Elliot is maybe the most like her—like Austen. In her prose, she’s sort of winking and nodding to the reader.”

Her name getting dragged into the Johnny Depp mess: “I was like, ‘For the love of God, why? Why am I involved in this?’ I don’t remember that at all, but please, take me out of this. Don’t let this go further. Can you imagine, oh, my God, if I was called to the witness stand? I can’t believe that people are watching [the trial] like it’s a show. It’s like it’s a courtroom drama and my heart breaks. It’s so, so, so crazy. Humans are so f–king weird. The internet is a wild, wild place.”

What she will say about Depp & cancel culture: “What I struggle with in terms of cancel culture is the term cancel culture—the whole concept behind canceling a human being, like they’re an appointment. No person will not make mistakes in their life. The point of being alive is figuring it out. Hurting other people, harming other people is not okay. There are consequences for those actions. But the concept of the Twitterverse deciding if someone just all of a sudden doesn’t exist anymore is horrifying, heartbreaking, and wrong. I do think that it will pass. I believe that people want to live in a better world, ultimately. Also, Twitter makes up like, what, 12 percent of the world? I mean, some of these people can’t even spell.”

On the ‘Fifty Shades’ trilogy: “I signed up to do a very different version of the film we ended up making.” I ask if the studio or the directors were the problem, or if it was a combo platter. “Combo. It was also the author of the books. She had a lot of creative control, all day, every day, and she just demanded that certain things happen. There were parts of the books that just wouldn’t work in a movie, like the inner monologue, which was at times incredibly cheesy. It wouldn’t work to say out loud. It was always a battle. Always. When I auditioned for that movie, I read a monologue from Persona and I was like, ‘Oh, this is going to be really special.’ ”

She got along really well with Jamie Dornan actually: “There was never a time when we didn’t get along. I know it’s weird, but he’s like a brother to me. I love him so, so, so much. And we were really there for each other. We had to really trust each other and protect each other. We were doing the weirdest things for years, and we needed to be a team: ‘We’re not doing that,’ or ‘You can’t do that camera angle.’”

She had a lot more to say about Fifty Shades but she was mostly talking around what the actual production issues were. I mean, it’s not a secret that EL James made terrible decisions with the story and the scripts, and the studio was wrong to give her that kind of power. But whatever – I can’t believe both Jamie and Dakota spend so much time justifying that franchise. They made a dumb movie trilogy and it ended up helping both of their careers enormously. Stop talking about it!