And John Travolta looked every inch the doting dad as he shared a very rare snap with his youngest child, 10-year-old son Ben, to Instagram on Saturday.

The actor, 67, smiled as he held his son on his lap and showed off the family’s new cat Crystal, eight months after his wife Kelly Preston passed away from cancer. 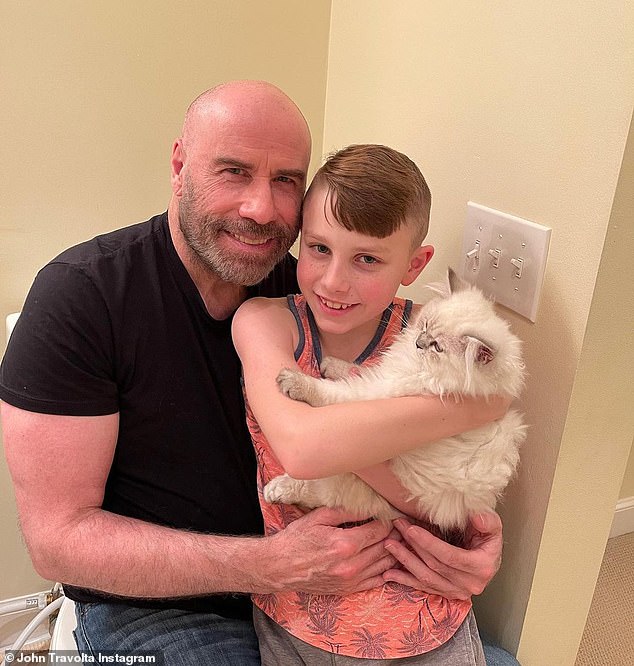 Family: John Travolta shared a very rare snap with his son Ben, 10, to Instagram on Saturday

John and Ben both grinned for the relaxed picture, with the youngster carefully cradling his fluffy pet for the image.

The Saturday Night Fever star looked laid-back as he spent quality time with his family, donning a comfortable black t-shirt and blue jeans.

John’s daughter Ella soon commented on the lovely picture of her dad and brother leaving a string of love heart emojis. 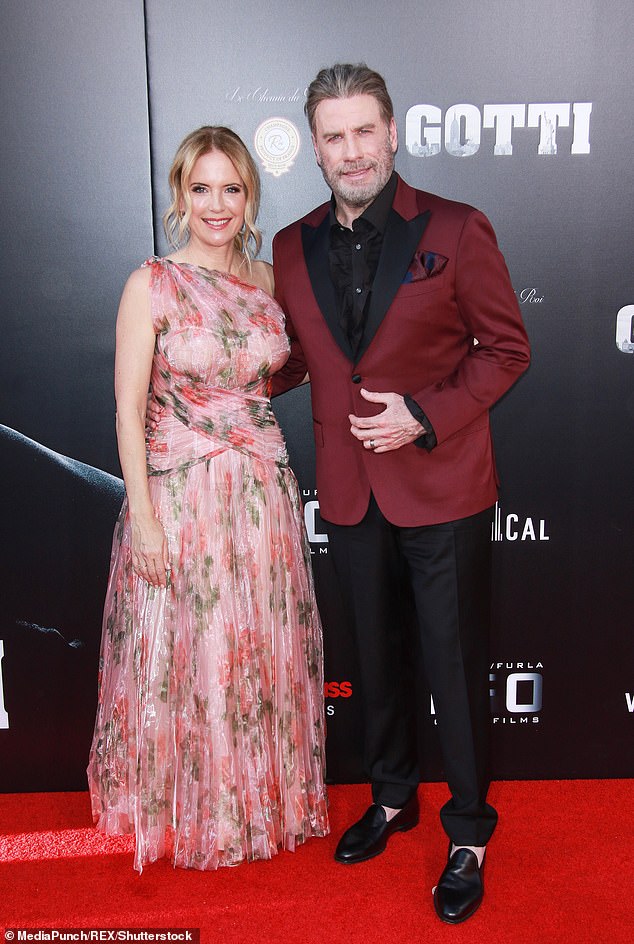 Tragic: The 67-year-old actor’s wife Kelly Preston, who he shared children Jett, Ella and Benjamin with, passed away from breast cancer last July (pictured together in 2018)

John is very close to his children, with Ella penning  a sweet tribute to her dad to mark his 67th birthday last month.

The aspiring actress, who is set to star in young adult film Get Lost, called him her ‘best friend,’ while gushing over their relationship on social media.

‘Happy Birthday to the most incredible man I have ever known. You are not only the best Dad ever, but you are also my best friend.Thank you for raising us, helping us and loving us and thank you for all of the good you do every day.

‘The world is so lucky to have you and so are we. I love you Daddy. I had the best time celebrating your birthday with you yesterday,’ she wrote.

New addition: John revealed that the family had welcomed a new pet, Ben’s cat Crystal in the caption to his lovely picture

The post accompanied a photo of the Pulp Fiction actor with Ella and Ben in what appeared to be a throwback photo as he has sported a bald head in recent years.

It comes after John and Ella’s TikTok ‘Scott’s Slide’ video went viral in recent weeks, as they recreated his iconic dance scene from Grease, which aired originally as a Super Bowl ad for Scott’s Miracle-Gro.

Ella also shared the video as she wrote ‘Some dads know how to dance, and some dads are @johntravolta.’

Kelly, 57,  kept her two-year battle with breast cancer private as her rep said in a statement: ‘She had been undergoing medical treatment for some time, supported by her closest family and friends.’ 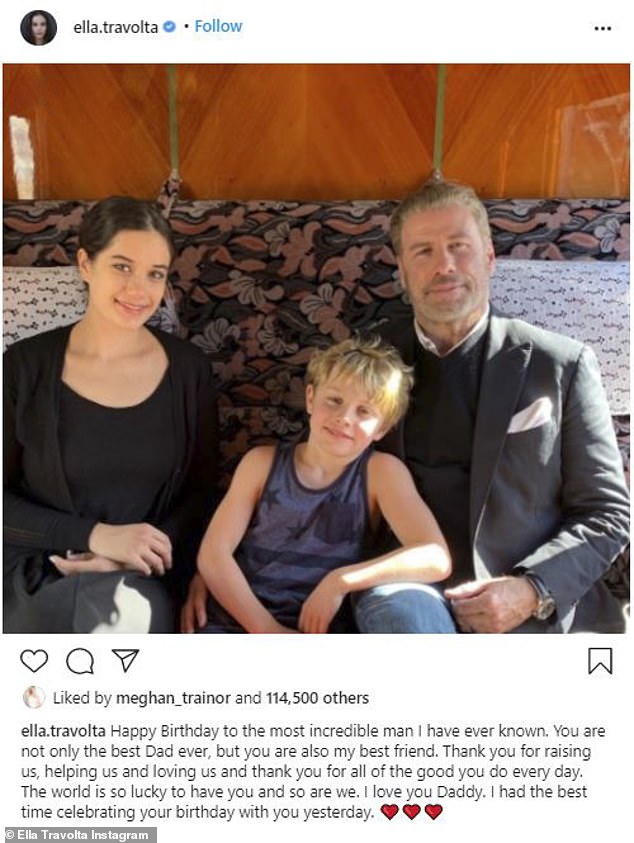 Close: It comes after John received a beaming birthday tribute from his daughter Ella, 20, on social media as she gushed ‘you are my best friend’ and ‘the world is so lucky to have you’

John, who was married to his wife for 29 years, confirmed the news of her passing with a touching tribute as he shared a photo of her on Instagram.

‘It is with a very heavy heart that I inform you that my beautiful wife Kelly has lost her two-year battle with breast cancer. She fought a courageous fight with the love and support of so many…Kelly’s love and life will always be remembered.’

Now eight months after her passing, John has listed the family’s vacation home in Isleboro, Maine for $5M.

The pair snatched up the home the same year they got married in 1991 and spoke to Architectural Digest years later about it being a passion project for them.

‘Though we both have strong ideas, we’ll each compromise, and we’ll work together on every aspect until it’s right,’ Preston said, John adding that it was a ’60-day marathon’ of redecorating. 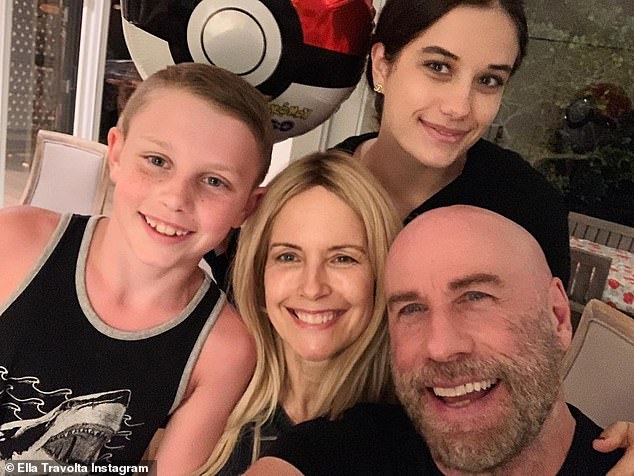 ‘The best one’: Kelly passed away last July following a private two-year battle with cancer, her last social media post being a tribute to her husband of 29 years as she wrote ‘Happy Father’s Day to the best one I know, we love you,’ just a few weeks before she died; pictured June 2020