Kanye West appeared to pause a drive through gorgeous coastal Malibu to take a phone call on Monday.

The 44-year-old superstar rapper was spotted standing at the side of a sleek black Dodge Charger with his phone held aloft and a pair of Apple AirPods Max placed over his temples.

The hitmaker was spotted without his new love interest Julia Fox, 31, who was back in New York City on Monday to celebrate her son Valentino’s first birthday. 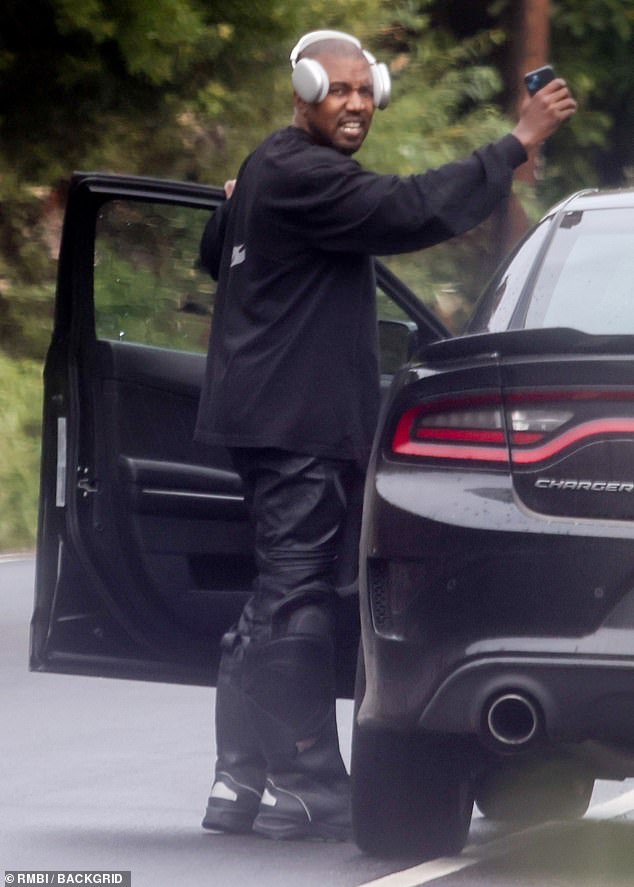 Giving his full attention: Kanye West, 44, appeared to pull his Dodge Charger to the side of the road in Malibu on Monday to take a phone call

Kanye was dressed casually in a long-sleeve black shirt, while he wore textured black leather pants that were nearly identical to pairs he was seen wearing on Saturday and again on Sunday.

He also seemed to have worn the same set of tall black boots.

The Monster rapper had his silver headphones — which cost $549 from Apple’s website — perched on his head while he leaned against his car and held his phone in his hand while chatting.

It’s unclear if he put the headphone on to take a call, as they weren’t placed over his ears, or if he had been wearing them prior to pulling over. It’s illegal in California to wear headphones or any kind of ear plugs while driving, except in special circumstances. 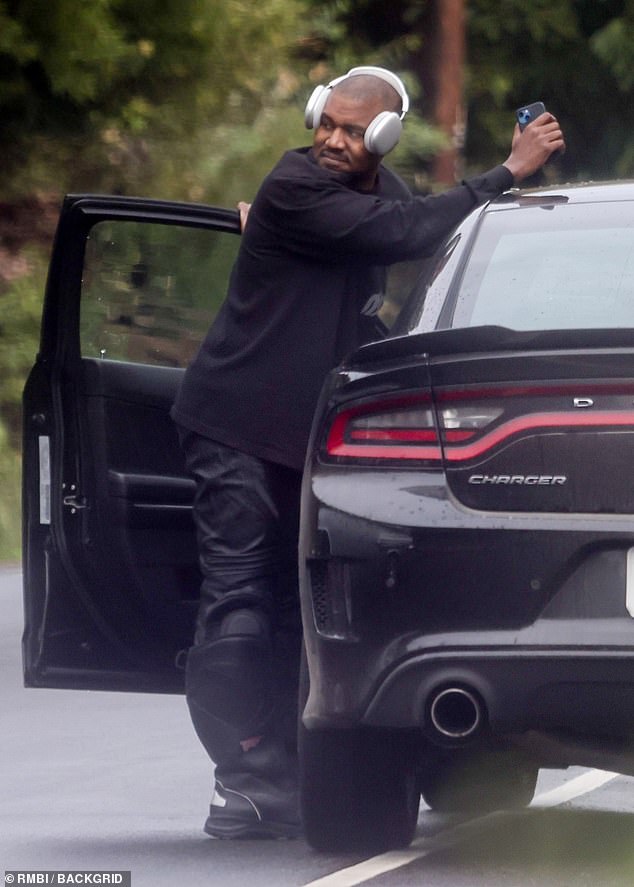 Back in black: Kanye was dressed casually in a long-sleeve black shirt with textured black leather pants that were nearly identical to pairs he was seen wearing on Saturday and again on Sunday, plus tall boots 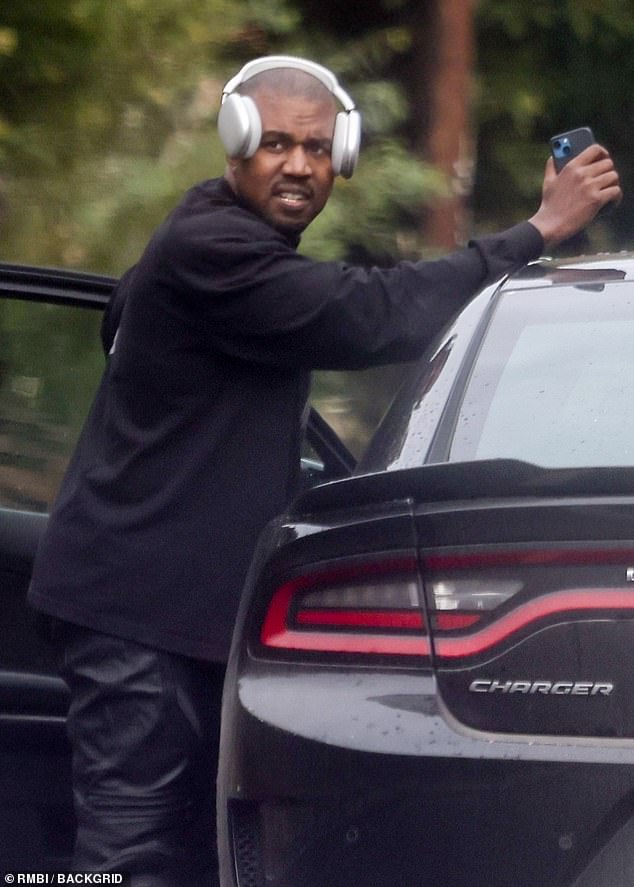 Safety concerns: It wasn’t clear if he used his pricy Apple headphones to take the call, or if he’d previously been wearing them. It’s illegal in California to drive with headphones on

Kanye was coming off a busy weekend which saw him facing drama with his estranged wife Kim Kardashian, 41, as he tried to attend their daughter Chicago’s fourth birthday party.

In a video he shot while driving on Saturday, the producer groused passive-aggressively about about not being ‘allowed to know’ the location of the party.

‘There’s nothing legal that saying that this is the kind of games that’s being played, it’s the kind of thing that really has affected my health for the longest and I’m just not playing, I’m taking control of my narrative this year,’ he complained.

‘I was supposed to be in Miami recording my album. My whole schedule is all based around on me being able to take my kids to school, me being there for them, making sure that I’m in their life, that’s the whole point…’ Kanye continued.

But he was later seen in video posted to Instagram by Atiana De La Hoya — the daughter of Travis Barker’s ex-wife Shanna Moakler — as he appeared to have a friendly conversation with Kim’s mother Kris Jenner. 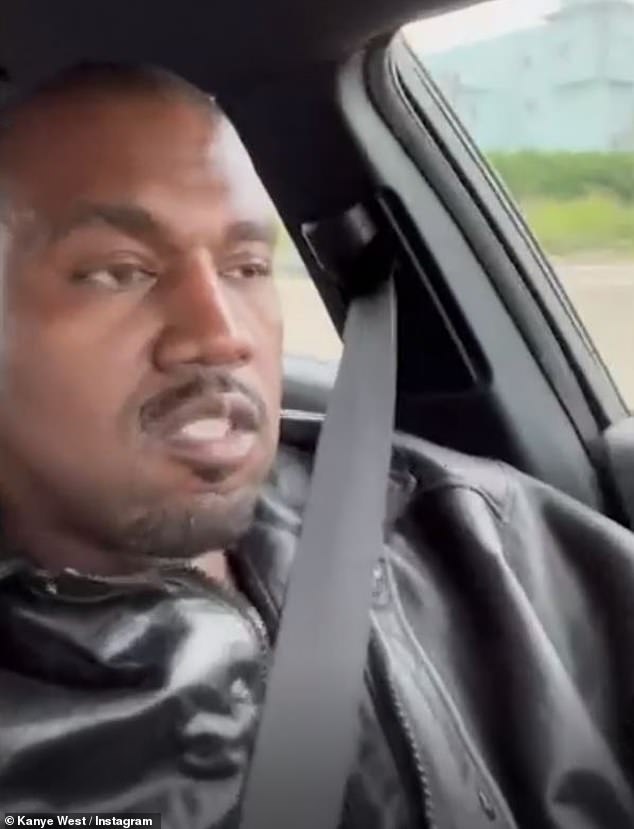 Rough weekend: On Saturday, Kanye complained in a video from his car that he wasn’t ‘allowed to know’ the location of his daughter Chicago’s birthday party, though he eventually made it 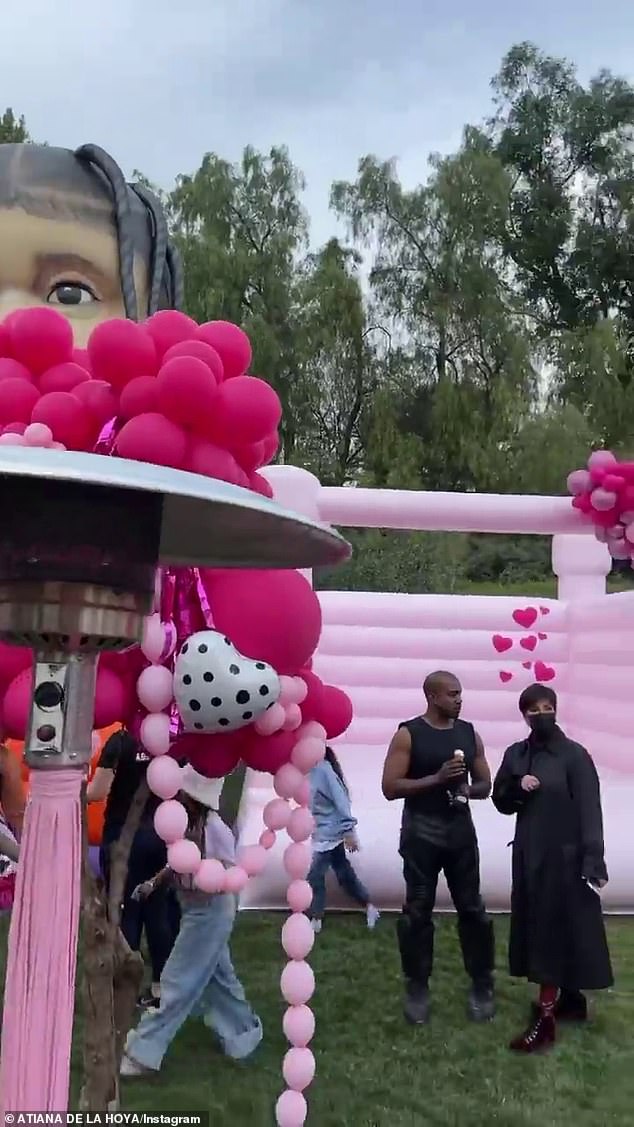 Still made it: He was later seen chatting with Kris Jenner at the party. Kanye revealed that he only got there because Travis Scott told him the time and address

The birthday visit with Chicago and the rest of his family appeared to have completely changed his mood for the better.

‘I’m so happy right now, I just came from Chi’s party,’ Kanye said in a video he recorded later in the day that was obtained by TMZ.

In the clip, he revealed it was only thanks to his friend — and Kylie Jenner’s boyfriend — Travis Scott that he made it to the celebration.

‘I just gotta shout out to Travis Scott for sending me the address and the time and making sure that I was able to spend that birthday memory with my daughter and to be there with the rest of the family,’ he said.

Kanye added that it was Kylie who let him onto the property after security guards tried to stop him from entering. 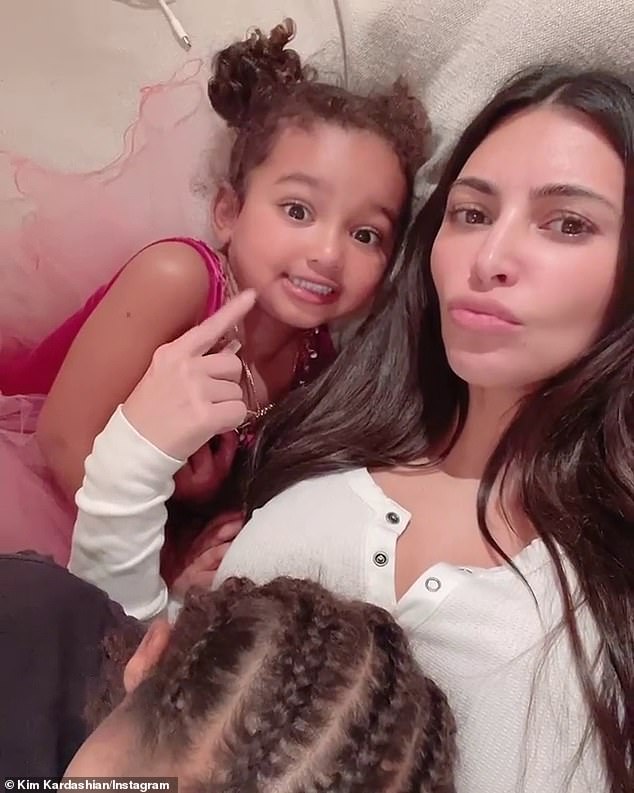 Peaceful: ‘There was no scene between him and Kim but they did spend most of the afternoon at other ends of the garden. He chatted with Kris and some other family members but there was no deep discussion with Kim yet,’ a source told The Sun; Kim pictured with Chicago

Although Kanye was in a better mood after making it to the party, a source told The Sun that things were so tense that they had to stay at ‘opposite sides’ of the party.

‘When he finally got the address he arrived like a bat out of hell in a rental car around 1 p.m., driving himself without any security,’ they shared.

Despite his apparent anger in his self-shot video, he apparently put that aside once he was with his children.

‘He seemed okay once he started talking to the family and was in great spirits laughing and playing with Chicago, it seems he just wanted to be involved in her day and didn’t want to cause trouble,’ they continued.

The rapper and the shapewear mogul had ‘no scene’ during the party, and barely had any interactions.

‘There was no scene between him and Kim but they did spend most of the afternoon at other ends of the garden. He chatted with Kris and some other family members but there was no deep discussion with Kim yet.’ 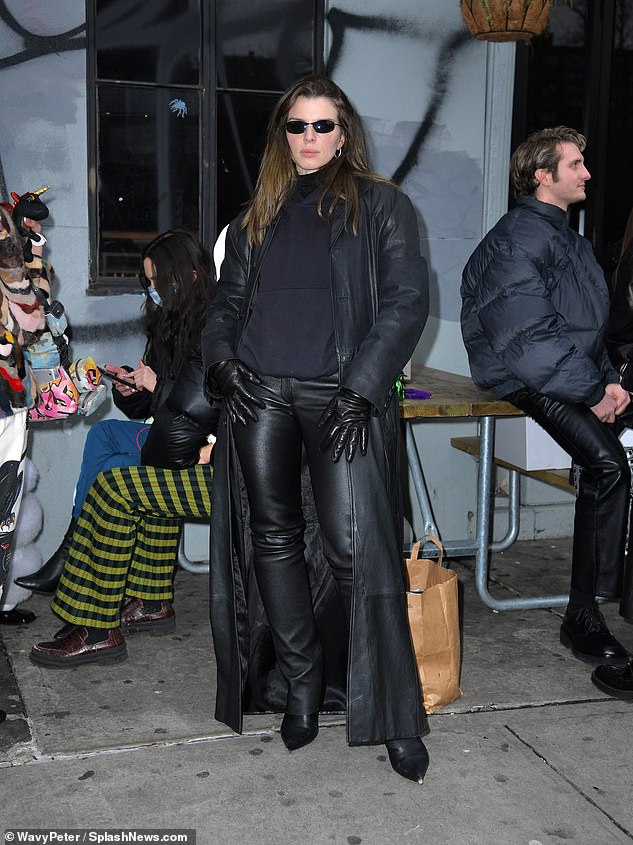 Another birthday: Kanye’s time with family came just days before his girlfriend and muse Julia Fox spent some quality time with her ex Peter Artemiev and her son Valentino to mark his first birthday; seen Monday

Kanye’s time with family came just days before his girlfriend and muse Julia Fox spent some quality time with her own family.

While the rapper was in Los Angeles, she was back in New York City on Monday to celebrate her son Valentino turning one.

Surprisingly, she was joined by her ex Peter Artemiev, whom she berated in vicious social media posts last month in which she called him a ‘deadbeat dad’ and an ‘alcoholic,’ among other insults.

Last week, she took to her podcast Forbidden Fruits to issue a public apology to Artemiev for calling him out for all to see. 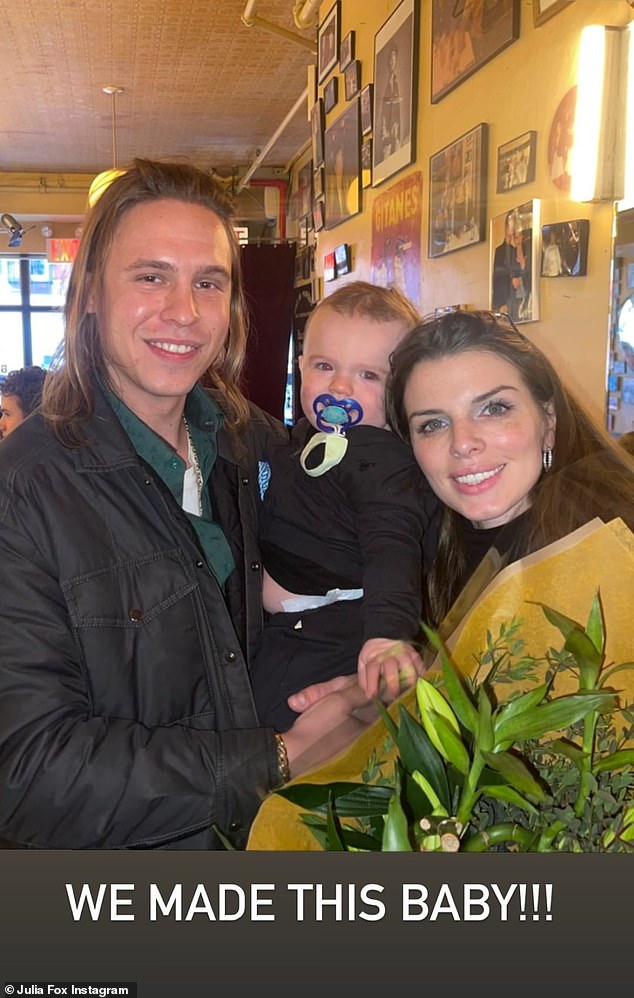 Patched things up: Last month, Julia viciously called Artemiev a ‘deadbeat dad’ and an ‘alcoholic’ on Instagram, which he denied. She apologized to him last week on her podcast Forbidden Fruits

She further detailed how she was struggling over the holiday period, saying: ‘Everyone had COVID. I had no help at all whatsoever, and my friend was out and saw Peter out and Peter was saying something along the lines of, “That b**** won’t let me see my son.” And when that was relayed to me… my blood boiled. I just snapped.’