State debt is a top priority for Victorians in the upcoming election. How does it rate with Labor and the Coalition?

Labor has so far had little to say about it, preferring instead to focus on what it bought rather than how it paid the bill. That’s the Big Build as well as all the health spending during the pandemic. They reckon they saved lives and the economy, pointing to record low unemployment. State debt might clip $165 billion by 2025-26, but assets will be an eye-catching $422 billion. 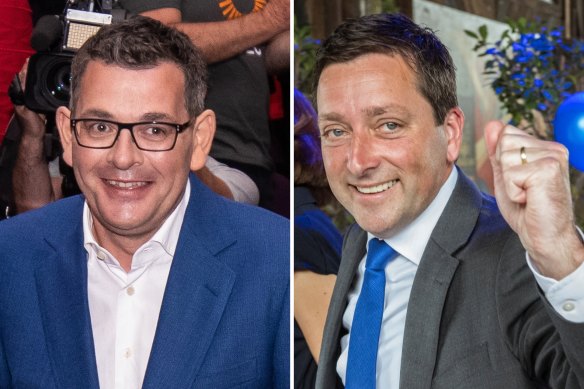 The government intends to continue to spend during the next term, to the tune of $13.4 billion, as estimated by me using the Victorian Parliamentary Budget Office’s tally adjusted for omissions and apparent errors. Eighty-five per cent is to be spent on an even bigger Big Build.

Caps like this are tricky because debt is rather hard to define. Is it budget-related, or will it include the total public sector? Will it cover only the operating budget, or will it cover infrastructure too? Will it be all liabilities, or just a subset?

There is nothing to stop a future government keeping to the cap by privatising monopoly assets and the river of gold they generate. Think Transurban, which shouldered all that debt to build CityLink and won a 40-year right to fleece Victorians as prize. Former premier Jeff Kennett, who privatised that road, keeps complaining bitterly that they keep “getting away with financial murder”.

If you want to see what that looks like on a bigger scale, go to NSW, where the government has less debt but 13 expensive and unpopular toll roads.

Insisting on the need for financial restraint, the Coalition is nevertheless promising to spend like topsy. It has so far announced more than 400 promises, compared with 285 by Labor. I estimate the cost over the next four years will be close to $20.5 billion, $6 billion more than the other side.

Yes, it will save about $11 billion from shelving the Suburban Rail Loop, but that will still leave a $9 billion gap. The pre-election budget update shows there is $2.4 billion available to pay for new infrastructure over the next four years, but that still leaves a pretty hefty unpaid bill.

While the Coalition has set aside $600 million to train a lot of new medical staff, it hasn’t included what it will cost to employ them when its 24 new or refurbished hospitals start opening in five years. Economist Stephen Duckett suggested the annual bill for an unlucky future government will be about $3 billion.

Should we be starting to panic?

The evidence on this makes for an interesting read. Back in 2009, two American economists famously published a study of national governments claiming that once public debt exceeds 90 per cent of the economy, growth declines.

That study was hit out of the park by critics, who pointed to flawed assumptions and dodgy numbers.

These days most economists agree that there is an association between high levels of public debt and low economic growth, but they keep squabbling over which one is the cause and which is the effect.

And remember, Victoria’s net debt at the equivalent of about a quarter of our economy is less than half what it was in 1960. It also looks rather healthy next to international comparators such as Canada’s Ontario, whose net debt recently pipped 43 per cent of the economy.

A survey by The Age’s polling company Resolve for the Victoria’s Agenda project found 16 per cent of voters nominated “economic management and recovery” or “managing the state’s finances” as their highest priorities. That was as high as health, and only the cost of living – at 20 per cent – was higher in that poll.

So we find ourselves on the eve of a state election where the level of public debt is worrying a lot of people, but the evidence to justify this is contested as well as rather thin.

We have a government that has decided to turn the other way, and an opposition that is committed to capping debt while promising to outspend the government by a ratio of two to one.

How then might we best evaluate which party is on the money? The level of public debt matters far less these days with interest rates still relatively low in real terms and inflation boosting nominal economic growth faster than the interest rate on government debt. What matters most is the gap between operating income and expenses.

The pre-election budget update shows $2.3 billion has been set aside over the next four years to pay for new operating initiatives. I reckon the operating cost of Labor’s promises is close to $2 billion, while the Coalition’s adds up to more than $7 billion.

That big financial hole sits uncomfortably next to a debt cap that has yet to be defined or valued. And then there are all those hospitals that will one day roll off the production line without the funding enabling them to open.

Debt might be a top priority for Victorians. But it does not seem to rate that well for either Labor or the Coalition.

The Opinion newsletter is a weekly wrap of views that will challenge, champion and inform your own. Sign up here.