Bad influence! Selfie-seekers cause thousands of pounds’ worth of damage while posing outside £2 million pastel pink home in Notting Hill after it becomes a photo hotspot

A grandfather says posers have caused thousands of pounds worth of damage to his pastel pink London home as it has become a photoshoot hotspot.

Ex-fashion designer Peter Lee, 77, has multiple groups of families, influencers, and ballerinas and more, taking photographs of themselves daily outside his house near Kensington Palace in west London.

He’s says its popularity is racking up hefty repair bills, including thousands of pounds to replace the now-cracked tiles decorating the steps to the £2million house, for the first time in the 44 years he’s lived there.

Mr Lee suspects the cracks are caused by visitors performing elaborate acrobatics to get the perfect shot, many of which have been caught on his doorbell camera.

One girl in a neon pink two-piece that matched the house held herself up on Mr Lee’s railings and did the splits in the air for the camera, after flicking her hair back and forth in front of a group of friends in the same outfits. 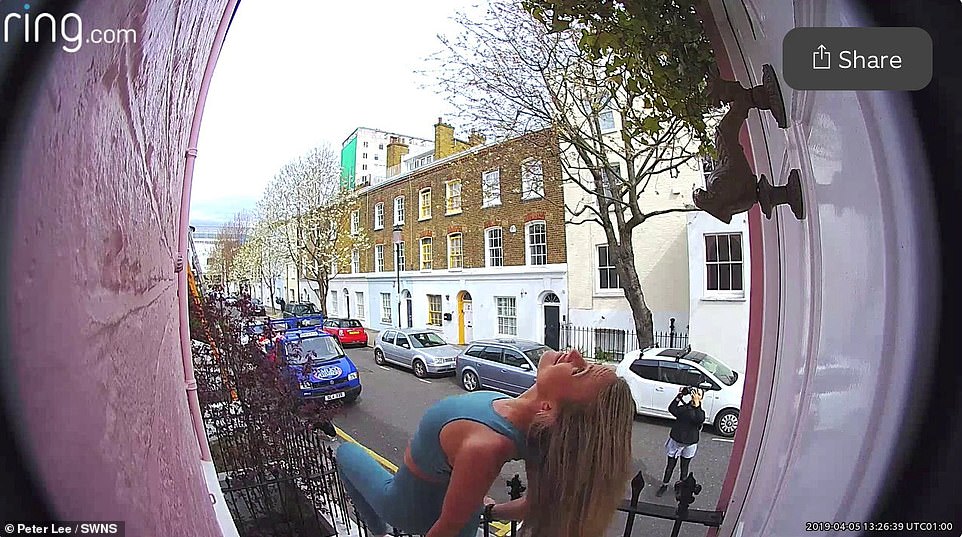 West London homeowner Peter Lee says his house has become a photo hotspot, with the increased footfall outside the property causing thousands of pounds worth of damage. Many of those taking pictures have been caught on his doorbell camera (pictured) 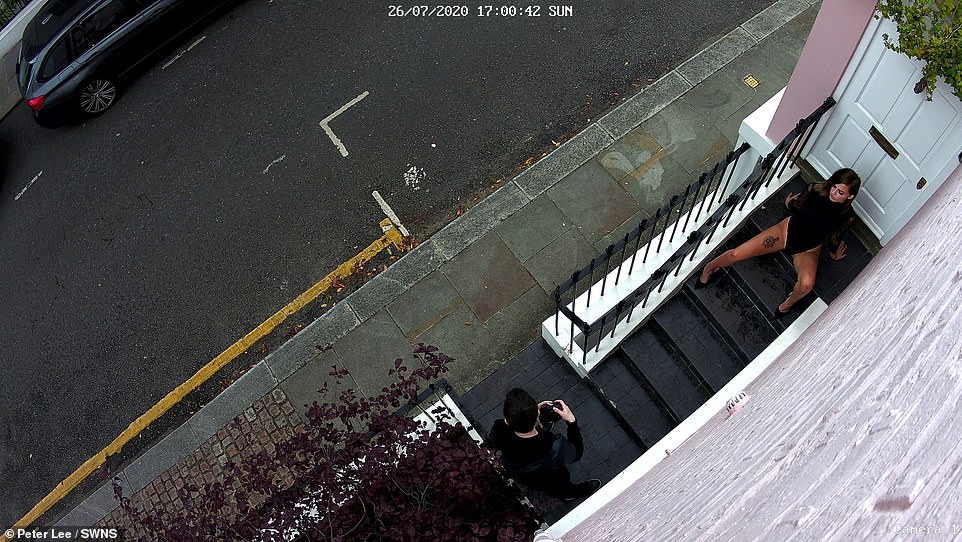 His house, near Kensington Palace in west London, has become a hotspot among influencers who take pictures outside the property 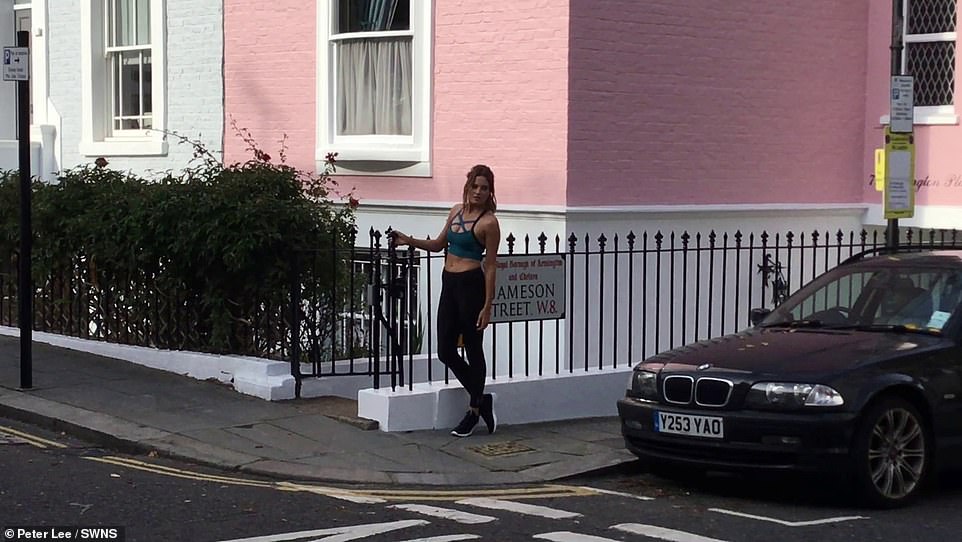 According to Peter, his home’s popularity is racking up hefty repair bills, including thousands of pounds to replace the now-cracked tiles decorating the steps

Some stay for hours. A nearby ballet school have become regulars, taking the children’s end of year pictures in ballerina dresses in front of the house.

He said: ‘I don’t know what they’re doing, blogs on their websites?

‘One girl was sat out there for half a day on her own. She put her phone in the middle of the street, took photos of herself against the house and then ran back to grab the phone when a car came.

‘I normally just watch them on the screen, but I had to go down and say ‘did you get what you wanted? You’ve been out there for half the day.’

The pristine two-bed house is pink surrounded by black iron railings and black tiles leading up to the porch, plants hang over the entrance with white latticed windows.

Mr Lee said: ‘There are some outside right now, I wish you could see them, there’s a whole family having their photos taken on my top step.

‘If you had been standing here now you would have seen a whole family, they’ve gone now. I’m just waiting for the next ones.

‘Sometimes I wait until they’ve gone to go outside.’ 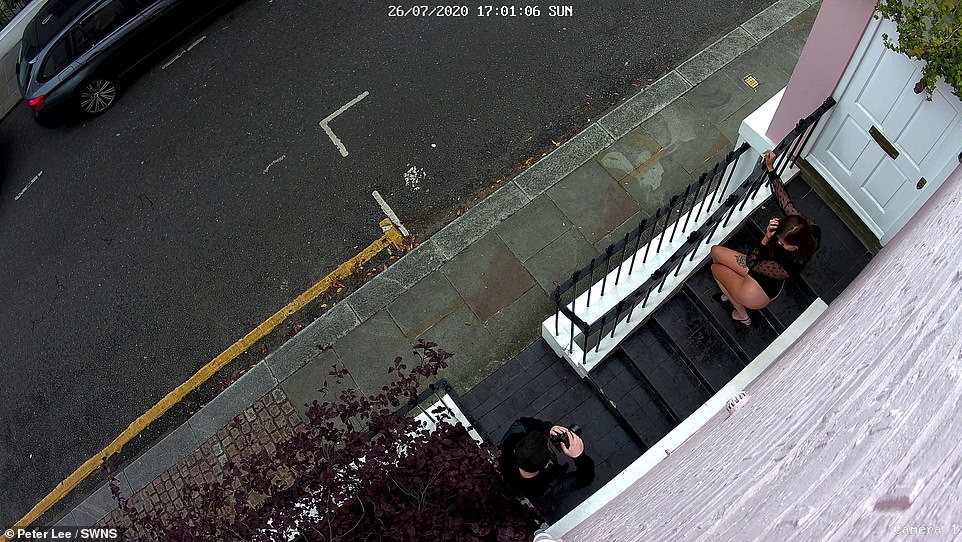 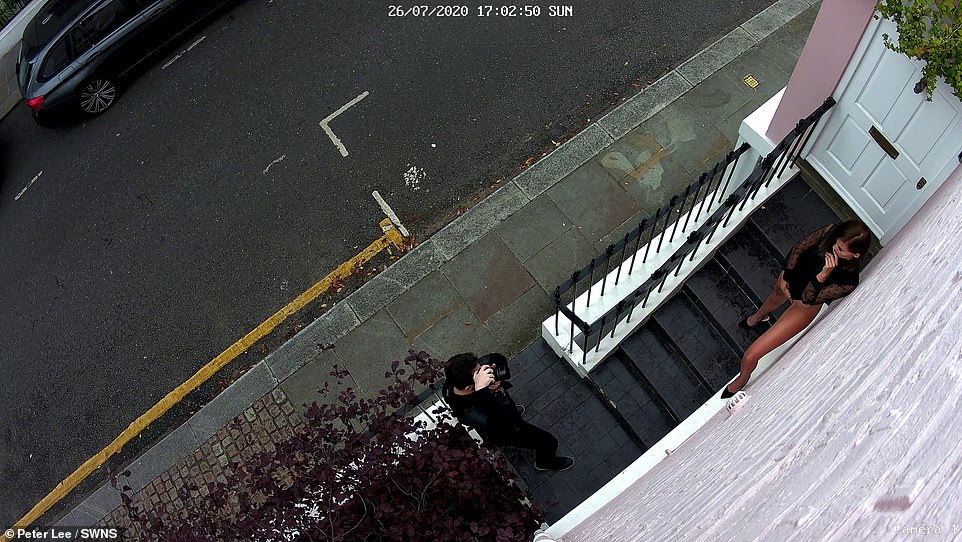 Its unique aesthetic look means it has become popular as a photo hotspot, among influencers as well as families 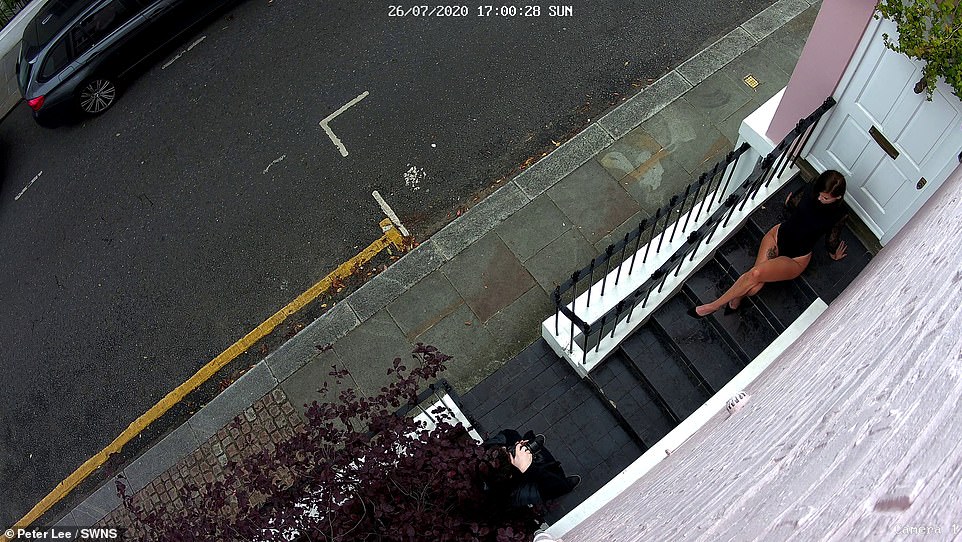 According to Peter Lee, large crews of people have shown up outside his house, with people even bringing changing tents for their photo sessions

The grandfather has had large crews of models turn up with tents to change in, and one group with a tent left a bag of clothes outside the garage.

He said: ‘They were nice clothes: I gave them to my granddaughter, she was quite happy to receive them, they were too good to give to the charity shop.

‘I left a note on the railings saying I have the clothes inside, so I did the right thing.

‘I think they had been doing so many photoshoots they forgot where they left the clothes, which I was surprised at, the clothes weren’t cheap and they were brand new with labels.’ 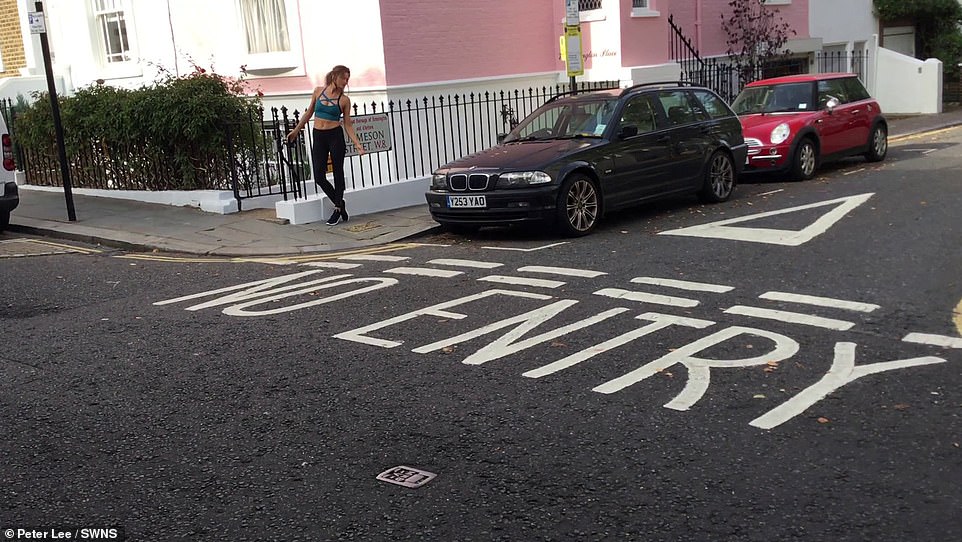 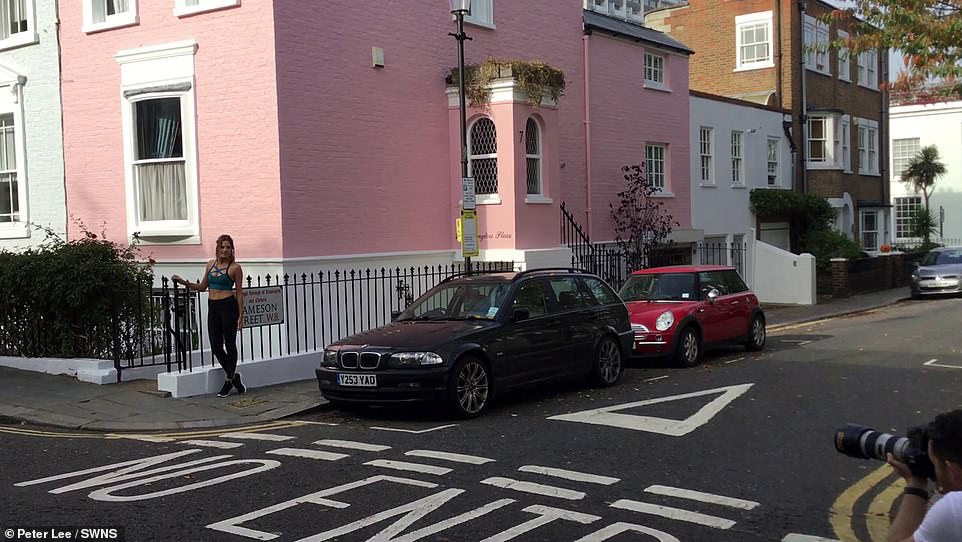 The two-bedroom house, which is worth £2 million, has a unique look and is surrounded by black iron railings and black tiles leading up to the porch

But Mr Lee is concerned about the cost of repairing the damage, adding: ‘Girls with high heels are probably causing damage to the steps – I did see one girl in heels jumping up and down flinging her arms up in the air.

‘I was watching from the living room and thought that stupid girl is going to be damaging my tiles – I went outside afterwards and saw two tiles were cracked.

‘They’re strong enough for walking but not jumping.

‘They could have been cracked from somebody delivering the washing machine, I can’t totally put it down to the girls dancing up and down the steps.

‘Breaking the tiles is a nuisance, but its done.

‘These tiles should last a lifetime. As you can see from the photographs I’m very finickety about every detail. 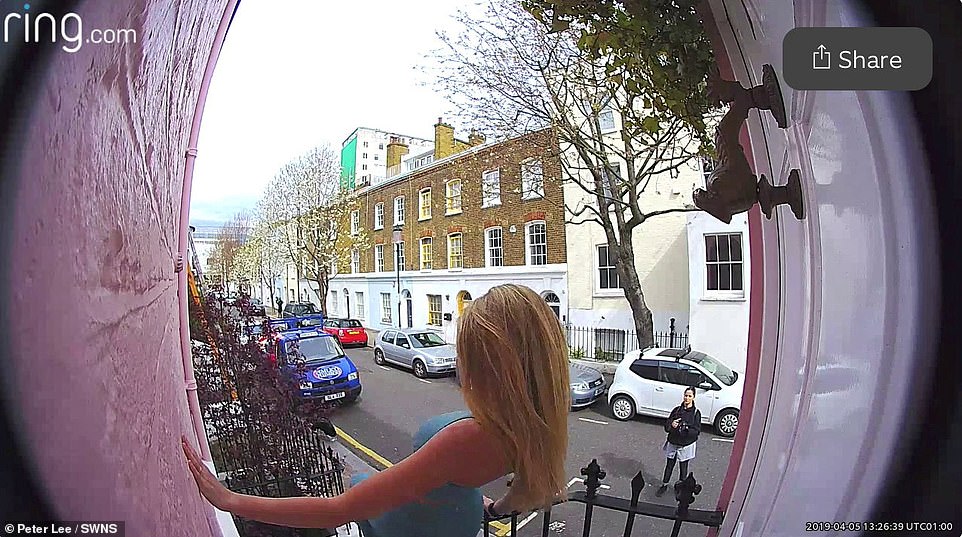 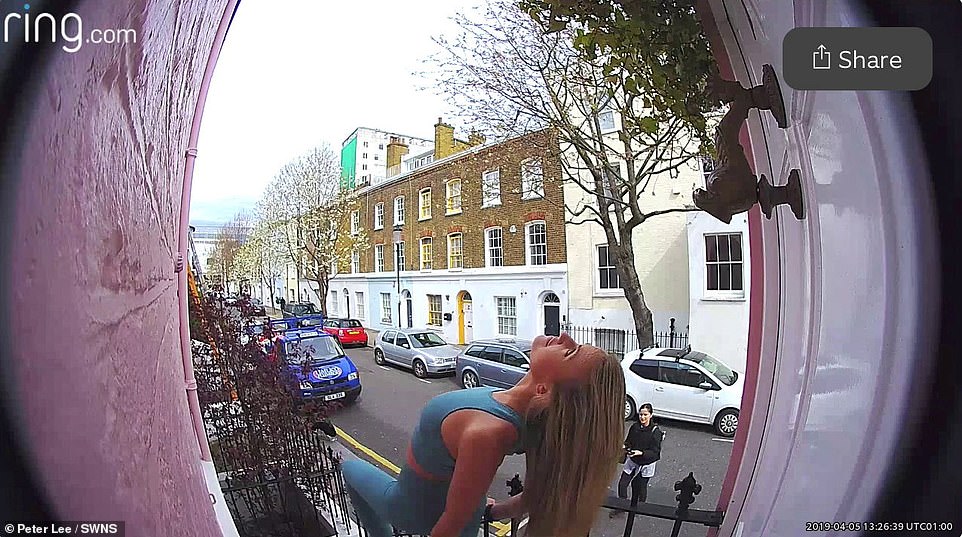 Peter says that for the first time since moving into the property 44 years ago, he needs to replace the external stair tiles – which he attributes to people performing acrobatics on the stairs

‘It’s going to cost thousands of pounds to replace the steps, and I can’t get the old fashioned tiles.

‘The modern version of the tiles are so thin, they look rubbish. And it’s still £2,500 to do ten steps.

‘They just do not look good, when you have a period house it’s the little details that matter. I want to keep it authentic.’

Made in Chelsea star Binky Felstead was one of the many to pose outside Mr Lee’s immaculate front doorstep, in what looks like a professional photoshoot, with the photographer calling at her to change her poses as a crowd looks on.

Mr Lee filmed the scene. He said: ‘My granddaughter saw the picture and said she was famous. But they didn’t ask permission to take the photographs.’ 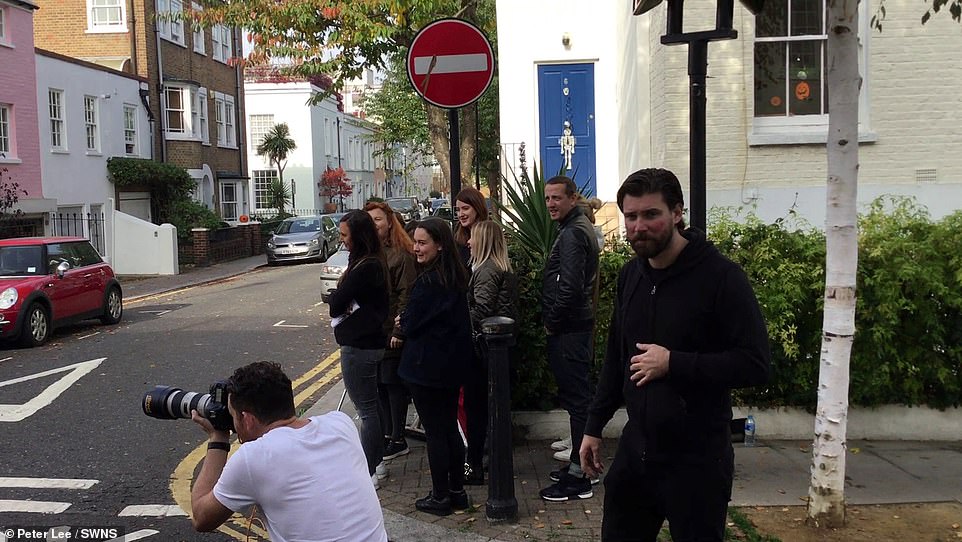 It’s not just enthusiastic amateurs who turn up to take photos – from images of the hotspot, it appears as though professionals using expensive kit also use the site as a location

The grandfather used to own Ossie Clark Ltd., a clothing line originally created by the eponymous designed who was stabbed to death in 1996.

Mr Lee took over the company in 1978, the same year he moved into the property, and he retired 20 years ago.

He reckons the influencers arrived when smart phones got cameras on them, but they’ve increased in recent years.

He said they do come to other houses on the street, but his does get more attention than any others. He said: ‘I think because it’s pink.’

Neighbours of Mr Lee suggested he puts a charity collection box outside.